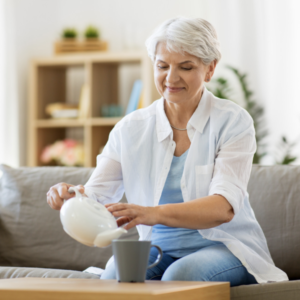 Often touted as “a miracle beverage,” there are innumerable articles, including on agebuzz, about the physical and brain health benefits of tea, especially green tea. While the scientific data to support many of these claims is limited, there are some known facts, and new scientific studies, that support the health benefits of including at least one cup of tea in your daily diet. At a minimum, it’s clear that green tea contains polyphenols or catechins, compounds thought to contain anti-inflammatory properties that can reduce your risk of chronic illness, cardiovascular disease, and digestive issues. In fact, new research out of the University of Barcelona suggests that a polyphenol rich-diet (which would include green tea and other foods such as dark chocolate or pomegranate juice) appears to improve intestinal permeability (leaky gut) that is often associated with aging. In this study, among people over age 60 who underwent a polyphenol-rich diet for 8 weeks, changes were found in their gut microbiota that reduced their intestinal permeability (which can cause potentially toxic substances to seep out of the gut into the bloodstream and become implicated in causing chronic disease). For more on this research, fire up the tea kettle and read here.

However, one recent and somewhat provocative new study seems to upend previous thinking about how green tea provides such health benefits. It has been thought that green tea is an antioxidant, meaning that it stabilizes the destructive free radicals in your body that can damage normal cells if they build up to high levels. However, new research published in the journal Aging suggests that instead, green tea acts as a “pro-oxidant,” meaning the polyphenols in green tea actually briefly increase oxidative stress, increasing the defensive capabilities of your cells, akin to the way a vaccine trains your body to fight a virus. The science of this gets a bit complicated, but for the average older adult, the bottom line is the same: experts recommend you ingest green tea daily (though not in large quantities or concentrates) as a way to enhance and support healthy aging. For a more detailed explanation of the science, pull out your old high school science textbook and click here.

One additional new study is also of value for those of us concerned with healthy aging: Researchers at the University of California Irvine School of Medicine have discovered that tea contains compounds that relax blood vessels and thereby lower blood pressure. Published in the journal Cellular Physiology and Biochemistry, this new research found that compounds in both green and black tea may help scientists develop new medications to address hypertension, a common and serious problem among older adults. So put some tea bags in your cart and read more here.