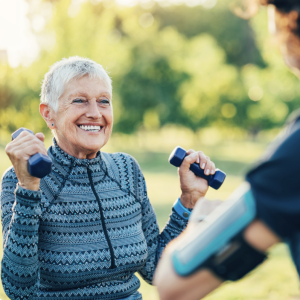 Over the years we’ve explored the connection between exercise and building brain health. The evidence has been building for a while that keeping your body moving and physically fit not only supports better physical aging but can also keep your mind robust and functioning despite advancing age. Now we can report on two recent studies that not only add to the mounting evidence but expand our understanding of this connection and how it may lead to treatments for those unable to be physically active.

First, there is a new research study of octogenarians out of Chicago, published in The Journal of Neuroscience. The activity levels of the participants were monitored during their later years and, following their deaths, their brains were deeply studied to determine differences in cells and volume from the brains of those more sedentary. It was determined that vital immune cells in the brain differed in the active versus the sedentary, and those who were more active had greater volume in the hippocampus region of their brains. Researchers also concluded that physical activity lessens the risk of dementia- even among those whose brains showed evidence of disease, the onset of symptoms was much later in those who were physically active than those who were inactive. Further, the level of activity that seemed to make a difference in brain health was not out of reach for most people. Bottom line? Even modest amounts of physical activity, and less sedentary time, can achieve better brain outcomes. For more info, get out of your chair and click here.

Offering even more insights is a recent study out of Stanford University. Investigating how exercise affects the brains of mice, researchers set about to determine what factors resulting from exercise might influence brain health to produce positive cognitive benefits. They discovered a protein called “clusterin,” which seemed to be the decisive factor to tamp down brain inflammation as a result of exercise. Although it’s not clear exactly how clusterin works, it appears to be produced in the liver and heart, thus suggesting that brain health may be dependent on not only what goes on in the brain but the activities of other organs as well. Furthermore, when these researchers injected clusterin into the brains of mice with the equivalent of Alzheimer’s, the clusterin reduced inflammation in those mice brains, a positive sign for what might happen in humans if a similar process were conducted. Finally, when the blood of the marathon running mice was injected into the sedentary mice, the brain functioning of the sedentary mice mirrored what had happened with the positive brain benefits of the mice who exercise. All of this leads to the possibility that either through plasma transplants from the young to the old, or from medications that capture the benefits of clusterin, it may one day be possible to improve brain functioning in people who cannot achieve the results through exercise. This is what science journalist (and author of the new book The Tailored Brain) Emily Willingham terms, “Getting the brain gain without going through the exercise pain.”

One note of caution, however. A new study published in Neurology suggests that air pollution may erase whatever brain benefits are to be derived from physical exercise. With over 8000 participants in this study, researchers from the University of Arizona found that high levels of air pollution were associated with worsening brain health, including white matter lesions which may lead to a greater risk of stroke or neurodegenerative disease. As the researchers themselves stated, “We are increasingly recognizing the importance of exercise as a modifiable lifestyle factor that can reduce the effects of brain aging and risk for Alzheimer’s disease. These findings suggest we may need to consider how and where we exercise in order to gain the most brain benefits.” So next time you’re out for a walk or run, stick to the country lanes rather than the city streets and read more here.