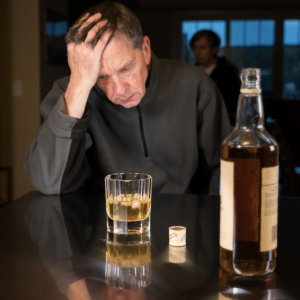 Even before the pandemic, the warning signs were blaring that excessive alcohol consumption was dangerous for brain health. Now, several months into the pandemic, it appears that excessive alcohol consumption and binge drinking has risen among older adults, following the stressors inflicted by the pandemic and resulting quarantine. In new research published in the Journal of Drug and Alcohol Abuse, researchers concluded that every week of lockdown makes binge drinking (defined as 5+ drinks for men, and 4+ drinks for women within a 2-hour time frame) more likely. And writing in Next Avenue, Dr. Annie Kleykamp from the University of Rochester School of Medicine, warns that older adults may be particularly susceptible to the risk of alcohol or substance addiction right now, with data showing a steady increase in the number of adults over age 55 seeking first-time treatment for alcoholism.

This increased evidence of drinking comes at a time when research is mounting on the negative effects of alcohol on aging bodies and minds. For example, a new study out of South Korea found an association between ½ glass of alcohol a day and an increased risk of obesity and metabolic syndrome. Another recent study of moderate drinking found that for those with Type 2 diabetes, 8-14 drinks/week can increase the risk of high blood pressure. Regarding the impact of alcohol on brain health, another new study published in Nature Scientific Reports found that even among moderate drinkers having less than 14 drinks/week, brain scans revealed a reduction of total brain tissue, which impacts the ability of the brain to function optimally. While alcohol abstinence can reverse some of this damage, it’s a worrisome sign that baby boomers have shown the sharpest rise in harm from alcohol consumption compared with previous generations.

Finally, one other study from the British Medical Journal examined the lifetime impact of drinking on brain health. Study authors found three particular points in time when alcohol consumption will have a detrimental impact on the brain: during gestation, later adolescence, and older adulthood (over age 65). While alcohol consumption is one of the few modifiers that can be altered to lower the risk of dementia, in fact, the evidence points to a worrisome increase in alcohol consumption, and even alcohol-related deaths among older adults worldwide, especially in wealthier countries.

So before you reach for another glass of booze, it may be time to consider alcohol alternatives for your next cocktail. To get you started, pull out your blender and take a look at this new book of alcohol-free recipes, entitled Good Drinks.