(Maybe Don’t) Drink To That: Alcohol And Aging - agebuzz

(Maybe Don’t) Drink To That: Alcohol And Aging 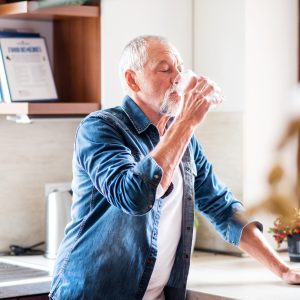 (Maybe Don’t) Drink To That: Alcohol And Aging

There’s nothing like a night of heavy drinking to remind you that you’re not as young as you used to be. As we’ve previously profiled in agebuzz, drinking as an older adult can cause much more impact on your body and brain than it did when you were younger. In fact, recent research from USC demonstrates that when it comes to drinking alcohol, every drop counts in terms of brain aging. There’s no doubt that drinking causes accelerated aging of your brain (as does smoking). So before you pick up that next pint, first pay attention here.

But it seems that many of us haven’t gotten the message about eliminating or at least moderating our alcohol intake. In Britain, there are reports that Baby Boomers are driving a 60% increase in alcohol-related hospital admissions. This rise in drinking among older adults is attributed to such middle-age phenomena as stress, divorce or financial problems, and is often hidden from view as drinking is done at home without notice. And here in the US, one out of every 10 older adults are said to be binge drinkers (for men, 5 or more drinks in one sitting; for women, the number is 4 or more drinks). Such drinking can really take a toll on older adults- it’s a toxic mix with many of the medications seniors take while such drinking can also exacerbate chronic conditions and their management. For more on the toll of too much drinking among older adults, take a look here.

If any of this has gotten you to rethink your alcohol habits, then take heart- there are some great suggestions for switching to alcohol-free beverages, or at least lowering your intake, in this recent article from the Washington Post’s Bold School series.