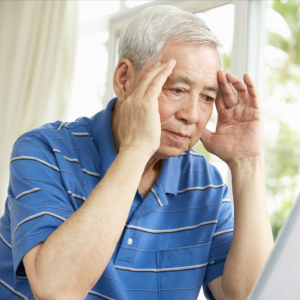 It may be difficult at this moment to stay upbeat and positive, given all of the challenges we’re facing as both individuals and within larger communities. Even in normal times, scientists tell us that out of the 50 – 70,000 subconscious thoughts we have each day, 80% of those are negative, worrisome thoughts. So should we just give in to the worry and negativity and wholly embrace a dismal perspective? Well, according to new research, it’s worth the effort to try to turn those negative thoughts around. A new study published in the journal Alzheimer’s & Dementia has found that negative repetitive thinking is linked to signs of protein build-up and cognitive decline in older brains. In other words, you’re not doing your brain (or your body) any favors by dwelling incessantly on the negative.

Repetitive Negative Thinking (RNT) is the process of ruminating repeatedly on the past and worrying about the future. This new study found that the greater someone’s RNT, the more rapid their cognitive decline and the more likely they are to have significant amounts of tau and amyloid proteins in their brain, which are linked with the presence of Alzheimer’s disease. The lead researcher on the study, Dr. Natalie L Marchant, has noted that ⅓ of dementia cases may be preventable, so it’s important to better understand risk factors and try to mitigate their impact. She goes on to note that mental health problems such as depression, anxiety, and PTSD are already linked to a higher risk of dementia, so the newly revealed risk of RNT makes sense, and it could be that chronic stress from RNT releases the stress hormone cortisol into your bloodstream, which can harm both the body and brain.

The good news is that RNT is amenable to reversal through behavioral therapy and mindfulness training and thus there are psychological tools that can lessen this possible cause of heightened dementia risk. As Dr. Scott Brea from the Cleveland Clinic makes clear, negative thoughts are more likely to capture your attention, so the trick is to change your relationship with all those worrisome thoughts. He, too, recommends a mindfulness practice to counteract the years you’ve invested in perfecting your “worry” practice. And for practical guidance on how to turn your thoughts from negative to positive, you may also want to check out the new book, The Power of Positive Aging, by David Lereah. In a recent interview with Next Avenue, Dr. Lereah revealed that a serious cancer bout led him to better understand the benefits of positive thinking and how that way of thinking can lead to a better aging experience. So pour yourself a glass-half-full, and read more about his practical and positive wisdom here.