Safe House: Where Will You Be Happiest Living Going Forward? 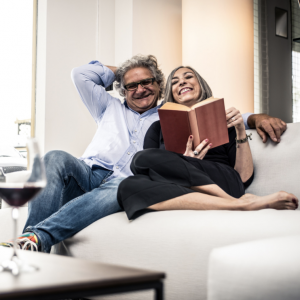 Safe House: Where Will You Be Happiest Living Going Forward?

As we’ve previously highlighted in agebuzz, the pandemic has led many of us to consider, and reconsider, our current housing arrangements and what we may need and want going forward. It’s not just a matter of choosing an individual house, apartment, or senior living arrangement. It’s also a matter of where our family resides, what our physical condition is, what our budget allows and what quality of life we anticipate or hope for. Some of these factors work in concert- and some may be in conflict. Therefore, thinking about housing options can often be a complex and ongoing challenge. For an article that lays out all of the different scenarios and housing options that may be right for those situations, pull out your mortgage papers and click here.

For a bit of historical perspective, it’s valuable to consider where previous generations of older adults lived and how the concept of retirement living or senior housing came into being. According to an article from The Silver Century Foundation, up until the 19th century it was rare for people to live beyond age 50, so there never was a consideration of where one would live out his or her later years. In the 19th century, 3 generation households became common, especially as more immigrants came to the United States. In the 20th century, following the depression and the beginning of the New Deal, older adults who began living longer now had a bit of financial security which allowed them to live on their own if they so desired. But the advent of “separate custodial facilities” for older adults (long-term care facilities such as assisted living, memory care, or nursing homes) came out of the need to clear hospital beds of older, impaired adults. As Atul Gawande has explained, nursing homes “were never created to help people facing dependency in old age.” That goes a long way toward understanding why such facilities have struggled for so long to adequately provide care and compassion to seniors in need.

A recent New York Times article makes clear that many older adults are now turning away from the traditional nursing home environment, but the question remains what can and will they turn towards instead. It appears that the landscape for senior living and senior care is changing, as admissions and occupancy declined from both COVID and the COVID-caused reductions in elective surgery, which often lead to skilled nursing admissions. Families have also come to the realization that perhaps they can do better with their loved ones living in the community. Long term care facilities that want to be relevant and successful going forward will need to make adjustments, as today’s older adults, even those who live with incapacities, want a more holistic sort of care that attends to not only physical wellness but also social, intellectual, and emotional well-being.

But perhaps more importantly, the emphasis seems to be shifting among many to aging-in-place and living in the community, with whatever help that’s needed becoming available through community programs or home-based care. New thinking about housing in the later part of life is coming from such innovative thinkers as Ryan Frederick, the founder of Smart Living 360, who’s advising companies and organizations about what it means for older people to thrive and not just survive as they grow older. In fact, Frederick has a new book coming out later this year, Right Place, Right Time: The Ultimate Guide to Choosing a Home for the Second Half of Life, which takes a holistic approach to examine how the place one lives affects and shapes personal well-being, an especially important consideration in our later years.

And if we’ve learned one thing from the pandemic, as we’ve spent so many months essentially locked down in our living spaces, where we live, and with whom we live, can make all the difference between a fulfilling versus a frustrating quality of life. So we’ve begun to see baby boomers hold on to their houses instead of downsizing, as many begin to realize the essential need to keep space for extended family. We also see older parents moving closer to their adult children and grandchildren, never again wanting distance and travel to get in the way of staying close. We even see the uptick in the purchasing of multi-generational houses as some consider everyone living together to be a necessary luxury. And we’ve begun to see the development of innovative solutions (such as UpsideHōM) where young and old can live side-by-side in the community, enhanced with services and support to keep older adults healthy and connected. If necessity is the mother of invention, then the growing number of older adults in our society will inevitably lead to new thinking, and new solutions, for those who not only survive but want to thrive in their later years.