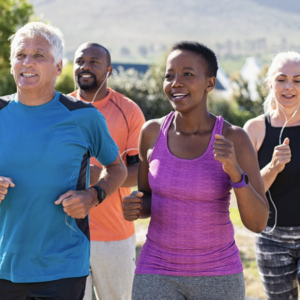 If by some chance you’re still on the fence about whether you should be exercising, there’s more good news about exercise to report. First, as a reminder, not only will your physical health be sustained and improved through exercise but it’s more and more clear that your aging brain also reaps the benefits of physical movement. And it appears that this message is getting through to those of us in our later years. In a new survey commissioned by the athleticwear company Asics, Baby Boomers (ages 57-70) were averaging 215 minutes per week of exercise, well more than the recommended 150 minutes/week of exercise and substantially more than those in the Gen Z demographic (ages 18-24) who average only 111 minutes of exercise per week. This generational exercise gap is in some way a reflection of time availability and other commitments we have at different stages of life. But what’s important for us to note, and to underscore, is that 82% of surveyed Boomers said that exercise was important for their mental health and was their top hobby. To find out more, put on your spandex and click here.

So let’s dig a little deeper into new research further supporting the brain benefits of physical exercise. First, in a small study out of the University of Georgia, researchers were able to use MRI scans for the first time to examine how physical activity interacts with networks in the brain and affects brain functions. What they found was that brain network functioning improves with exercise, even in patients who previously did not have optimally functioning brain networks. Better functioning brain networks mean better executive functioning in older adults. To find out more, read here. In a much larger study examining the medical records of 650,000 military veterans (and presented at the American Academy of Neurology Annual Meeting in Seattle this year), scientists reported a link between cardiorespiratory fitness and the development of Alzheimer’s Disease. Those among the fittest were found to be 33% less likely to develop Alzheimer’s than those who were the least fit. Furthermore, they report that of the several lifestyle factors that individuals can use to cut their risk for dementia (diet, sleep, no smoking, etc), the strongest evidence of benefit came from exercise. And you don’t need to be prepping for a marathon to gain an advantage- Just sensible exercise with small gains in cardiorespiratory fitness is thought to help. For more on the value of exercise to benefit your brain, strap on your Fitbit and click here.

Furthermore, there’s also data to support a connection between exercise and the incidence of depression. According to a just-published study in JAMA Psychiatry, there appears to be an association between even a small amount of exercise and depression risk. According to this study, which analyzed data from 15 existing studies on exercise and depression, researchers estimated that 12% of cases of depression could have been prevented with a certain amount of exercise. Again, researchers found that not a lot of physical exercise is necessary to help- even 2.5 hours per week of brisk walking was able to lower the risk of depression in comparison to those who did no exercise at all. While it’s not clear exactly how this happens biologically, it could be that the exercise improves circulation to the brain, strengthening the body’s immune response and lowering inflammation. Whatever the connection, it appears to be an easy-to-implement benefit for those at risk of depression (and certainly coincides with the findings from the earlier mentioned Asics survey). Find out more by reading here.

Finally, if after all of this mounting evidence you still have trouble motivating yourself to move, take a look at these motivational exercise tips from the National Institute on Aging.