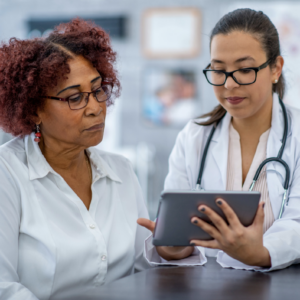 We’ve previously posted about possible connections between older women and the risk of cognitive impairment. Now, with newly published analysis from the University of Michigan showing that almost 50% of all deaths recorded by Medicare include a diagnosis of dementia, concern about how we can best lower our risk of dementia should be front and center for us all, but especially for older women. Why may women be more susceptible to dementia as they age? It’s a complex connection with no easily understood explanation, but there are several possible reasons.  Alzheimer’s is apparently 2x as common in women as in men. While some of that may be attributable to the fact that women tend to live several years longer than men, other factors are also likely at play. One hypothesis, for example, is that women produce more amyloid plaques in their brains to fight infection (women have stronger immune systems than men) but unfortunately, these plaques are implicated in the development of Alzheimer’s.

And now there is newly published research that suggests a link between women’s hormonal and reproductive events and dementia risk. According to this research, it appears that certain factors related to shorter estrogen exposure, such as older age of a first period, early age of menopause onset, or even a hysterectomy were associated with a higher risk of dementia while longer exposure, including pregnancy, long reproductive span and older age at menopause are all associated with a lower risk of dementia in women. It was also noted that the use of oral contraceptives was associated with a lower risk of dementia, though the study did not support a connection between the use of HRT (hormone replacement therapy) and dementia risk. While researchers suggest it is possible that reproductive factors may explain why women may be at greater dementia risk than men, there is simply not enough understanding yet to make a definitive connection. However, another study presented at this year’s American Heart Association Epidemiology, Prevention, Lifestyle & Cardiometabolic Health Conference found that the very early onset of menopause in women (below the age of 40) was linked to a 35% increased risk of developing dementia. It’s important to note, however, that an increased risk of dementia does not mean an inevitable dementia diagnosis. In fact, understanding you may be at great risk could be just the impetus you need to create lifestyle changes that can lower your risk.

It should also be noted that another study looking at antibiotic use in women made a connection with a higher risk of cognitive impairment as these women got older. In this study, data from over 14,000 women, with an average age of 54, was examined to discern a possible connection between long-term antibiotic use (2 months or more) with a subsequent risk of cognitive decline. This long-term antibiotic use was due to factors such as respiratory illness, acne, urinary tract infections, or dental problems. The women were tested and followed for 7 years, after which it was determined that those who had earlier used long-term antibiotics had lower scores on learning, working memory, motor speed, and attention tests compared to those who did not have long-term antibiotic use. Why is that? Researchers suspect that long-term antibiotic use caused gut-microbiome changes in these women that led to poorer cognitive function. While more research needs to be conducted to better understand this connection, the researchers noted that “the relation of antibiotic use to cognition was roughly equivalent to that found for 3 to 4 years of aging.” Since only middle-aged women were studied, it is possible this connection might be found in other populations. And while no one is suggesting you jettison whatever antibiotics you may be taking, it is a good reminder for women (and men) that antibiotic use should be limited to situations that really demand such medications- and that taking care of your gut may indeed also benefit your brain. To find out more, grab some yogurt and click here.