The Gut-Brain Axis: How Your Gut Microbiome Affects Your Brain Health 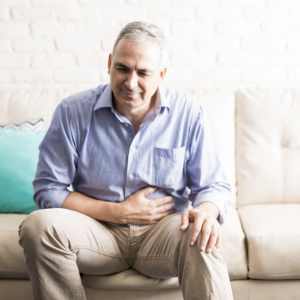 The Gut-Brain Axis: How Your Gut Microbiome Affects Your Brain Health

You may have heard the old adage, “You are what you eat,” but the phrase has taken on new meaning in recent years, as we learn more about the connection and interaction between our brain and our gut microbiome. For a while now, researchers have uncovered direct connections between the two in what is known as “the gut-brain axis.” Essentially we now know that millions of neurons in your gut connect with millions of neurons in the brain through the central nervous system, and they communicate back and forth. So, for example, feeling a bit of stress these days? It’s likely that may lead to some gastrointestinal problems as well, given the communication between these two. We also know that what goes on in your gut may very well affect your immune system and exacerbate the presence of inflammation in your body (a known contributor to such concerns as dementia and Alzheimer’s). So paying attention to your gut is in fact a major concern for healthier aging.

And now we have research drawing further links between age-related cognitive decline and your gut microbiome. In a study just published in the journal Microbiome, researchers present new evidence that the aging process may be linked with age-related changes in gut microbiota. In this study, fecal transplants from older mice to younger mice led the younger mice to display memory and learning impairments. In essence, in their cognitive functioning profile, the younger mice began to resemble older mice. Such research suggests the possibility of one day using fecal transplants in humans as a way to alter the gut microbiome in older adults and thus improve cognitive functioning. For more on this research, click here.

In the meantime, is there something you can be doing right now to address your gut microbiome and potentially put yourself on a path to healthier aging? There certainly seems to be evidence that the nutrients you take in can play an important role in your gut health. Specifically, certain food groups are thought to be especially beneficial to the gut-brain axis, including food with Omega 3 fatty acids (oily fish), fermented food, and high fiber foods. Other foods containing the sort of probiotics considered useful for healthy gut microbiota include yogurts, aged cheeses, and sauerkrauts. For a more exhaustive list, open that pickle jar and read more here.  Whether or not you should be taking a probiotic supplement very much depends on your individual circumstances and should be discussed in consultation with your physician. But whatever you do, it’s important to recognize that what goes into your mouth may have repercussions well beyond your stomach and even be critical for healthier cognitive functioning.