A Grain Of Salt: Great Health Benefits For Even Small Reductions In Salt Intake 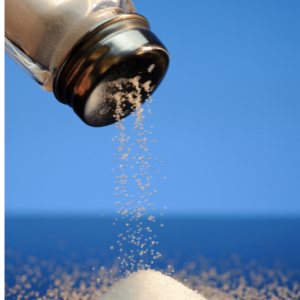 A Grain Of Salt: Great Health Benefits For Even Small Reductions In Salt Intake

Are you a sweet or salty person? When the going gets tough, do you crave a chocolate chip or a potato chip? They both have their pleasures- and perils- for you. Both sugar and salt can lead to significant health problems if they’re not limited in your daily diet. In fact, salt turns out to be extremely problematic, especially for nearly half of the US adult population that suffers from high blood pressure. Despite COVID, heart disease continues to be the #1 killer of adults in the US, and dietary salt is heavily implicated as a significant culprit in the number of hypertension cases, heart attacks, and strokes that strike millions of Americans each year.

Essentially, when your kidneys are confronted with too much salt, they are less able to eliminate fluid in your body, thus making your heart work harder and elevating your blood pressure. High blood pressure increases your risk of heart failure, stroke, and heart attack. It’s not complicated but it’s also not easy to eliminate salt from your diet, especially when so many of the foods we buy and eat contain way too much salt. In fact, in a just-published study in the British Medical Journal, the US is #2 (just behind China) in the amount of salt contained in our processed meats and fish, among other foods. Given the significant discrepancies seen in salt content among different nations, this research serves to underscore how US food manufacturers could greatly lessen the salt content of their food products if they chose to do so. Such a reduction would lessen the risk of serious cardiovascular disease among millions of Americans. Fortunately, brand new FDA guidelines address the levels of salt content in commercially processed, packaged, and prepared foods with the goal of encouraging such reductions.

Currently, the average US adult daily intake of salt is about 3400 milligrams, well above the recommended dietary guidelines of 2300 milligrams/day. Since processed or prepared foods from restaurants and grocery stores are the biggest sources of salt in the American diet, these new guidelines recommend that over the next 2 ½ years, manufacturers and restaurants cut their salt content enough to reduce the average salt intake of Americans by 12%. That may not sound significant but every day, 1800 Americans die of heart disease, and this small reduction of salt intake could prevent 450,000 cases of cardiovascular disease and save $40 billion in health care costs over the next 20 years. As New York Times Columnist Jane Brody made clear in a recent column about reducing salt in your diet, cutting even 350 milligrams of salt per day from the daily American diet (less than ⅙ of a teaspoon) could avert 1 million strokes and heart attacks. In essence, a little effort could have a humongous impact.

While the FDA places this burden on manufacturers, it behooves us all to see how we can cut even modest amounts of salt from our daily diet. As Brody and others have made clear, if done gradually, small reductions of salt from your diet are hardly noticeable, and she recommends such easy tips as rinsing canned beans before using them, salt your food after it’s cooked rather than while cooking (you’re likely to use less salt that way) and eat less bread if you can (as with such other food items like baby food, it’s surprising how much salt can be found in bread). The American Heart Association has a list of the “Salty Six,” which alerts you to foods with high salt content. Processed, prepared and fast food options tend to have the most salt but other foods have surprisingly high salt content as well. Further, you’re advised to read nutrition labels so that your daily salt intake stays at or below the recommended 2300 milligrams per day. Also, in your own home, it’s not a bad idea to begin to cook with less salt. For some easy-to-try recipes, put aside your salt shaker and read here.