Walk This Way: Walking Style May Signal A Diagnosis Of Lewy Body Dementia 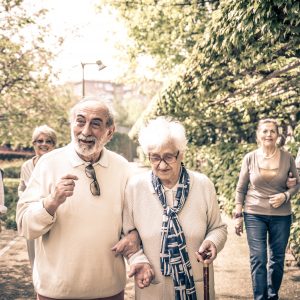 Walk This Way: Walking Style May Signal A Diagnosis Of Lewy Body Dementia

One of the major problems facing dementia researchers, as well as patients and their families, is that a diagnosis often comes too late to initiate meaningful help and support. This is especially true with dementia, which can be caused by a number of different neurologic or vascular conditions. But now researchers from Newcastle University seem to have figured out one telltale sign to diagnose Lewy Body Dementia and to distinguish it for clinicians from the more common diagnosis of Alzheimer’s.

Lead researcher Dr. Ríona McArdle stated, “The way we walk can reflect changes in thinking and memory that highlight problems in our brain, such as dementia.” It seems that patients afflicted with Lewy Body dementia vary their step time and length in a distinct, asymmetric way, different than what is seen in Alzheimer’s patients. Patients with Lewy Body dementia, which is closely linked with Parkinson’s and afflicts over 1 million people in the United States, may exhibit symptoms quite distinct from Alzheimer’s, so getting an accurate diagnosis is critical. Read more about this pioneering gait impairment research here, and click here to access more information and resources concerning Lewy Body dementia.