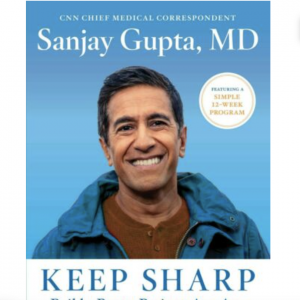 He may not recommend multi-tasking as a way to keep your brain sharp, but Dr. Sanjay Gupta certainly juggles many hats and tasks himself at the same time. He’s a practicing brain surgeon, Associate Professor of Neurosurgery at Emory University and Associate Chief of Neurosurgery at Atlanta’s Grady Memorial Hospital, as well as being the Chief Medical Correspondent for CNN. As an on-air medical correspondent, he regularly comments on health matters of utmost importance to Americans (think COVID) while making sure that he’s on top of both his own medical practice and the major public health concerns of our time. With all that on his plate, you’d think he wouldn’t have a moment extra in his life. But somehow he’s just managed to publish an important new book- Keep Sharp: Build a Better Brain at Any Age and in it, he reveals his acquired wisdom and practical suggestions for how to maintain a sharp and strong brain no matter what your age (and for the record, he just turned 51).

In a recent audio interview with NPR’s Terry Gross on Fresh Air, Dr. Gupta underscored his central thesis: it’s never too late to develop new neural pathways in your brain and the key concept to remember is that a normal human brain can continue to develop new brain cells, provided you regularly stimulate your brain with new ideas, activities or novel ways of doing something familiar (like using your non-dominant hand to feed yourself for a change!). And in support of renewing brain cells and strengthening neural pathways, he prescribes 2 core activities: getting 7-9 hours of sleep a night (how does he do that with all of his responsibilities?) and physical movement. And yes, he believes that multi-tasking is not so great for your brain nor does he think brain games are the primary way to keep your brain sharp or your cognitive reserves strong. Instead, he underscores that you should constantly expose your brain to new and different activities, rather than just mastering one activity over and over.

In an essay for his own CNN Network, Dr. Gupta gave specific advice about the myths he wants to bust and the behavior he wants to endorse, all in the name of healthy aging brains. Regarding myths? He emphatically states, “Do not accept the false idea that brain decline is unavoidable.” He remarks that there’s a difference between age-related brain changes and the tragic brain deterioration caused by disease. Before Alzheimer’s or some other dementia sets in and symptoms arise, he sees “a golden window” to optimize brain health and sharpness, boosting neural networks and stimulating brain cell growth. And while he sees little value in brain supplements, he does recommend a “SHARP” dietary protocol: Slash sugar, Hydrate, Add more Omega 3 fatty acids, Reduce portions and Plan ahead- all to keep those cognitive reserves intact. And the best investments for brain health? Good walking shoes and a good pillow for sound sleep!

Finally, in an interview on Next Avenue with writer Richard Harris, Dr. Gupta reminded readers that through better brain health you’re also likely to achieve better results in all other aspects of your health. And building better brain health is not an expensive or inaccessible option for ordinary people- it just requires you to adopt some of the lifestyle changes you’d make for something like better heart health- such as a healthier diet and physical exercise. Oh and one other suggestion: in order to continuously build those new neural networks, you need to “shake it up a bit, get outside your comfort zone, do something that scares you every day.” So grab your smartphone, click on your Audible app, and go for a long walk while listening to Dr. Gupta as he himself reads from his new book, Keep Sharp!