Senior Inspiration: What You Can Learn From Older Athletes Who Carry On 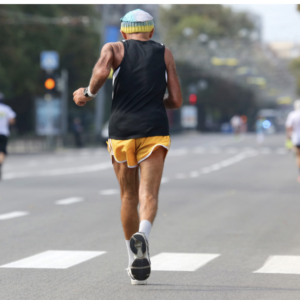 Senior Inspiration: What You Can Learn From Older Athletes Who Carry On

On the surface, they’re typical older men, who may be “weekend warriors” on the playing field or trails but certainly are not athletic professionals. But their athletic feats- at ages when many of us can barely walk a mile- are anything but ordinary. And hopefully, the examples they set can serve to inspire the rest of us to get up off our seats and get moving.

First, given the upcoming New York City Marathon this coming Sunday, Nov. 7th, meet Larry Trachtenberg, a 67-year-old runner from Oregon who will be the only runner in Sunday’s marathon who also participated in the first New York City marathon, 50 years ago, when he came in 32nd place. Since he’s not run a marathon since 1978, he is just hoping to finish the race this time around. His biggest memory of the first marathon he ran? The 6 cans of free soda he drank at the finish line! In comparison, there’s 82-year-old Keijo Taivassalo, who recently ran the Boston Marathon, his 57th marathon in a running career that began in his 40s. He’s routinely the fastest runner in his age group and has advice for regular adults who just want to take advantage of the benefits of exercise for healthier aging. While he trains harder and smarter as an older runner, he also credits his resilience and willpower for keeping him going. As he said, “I don’t give up,” and as proof, he plans to run the Boston Marathon again next year at age 83.

Perhaps the most inspiring of these older athletes is 79-year-old Bill Burke, a retiree who left his law practice at age 60 in 2003 and since then has become a mountaineering expert who has summited Mt. Everett twice. His motto? “I leave the gym sore rather than in pain.” Currently prepping for a 2000 mile solo canoe trip, Burke works out doing some kind of physical activity 6 days a week, spending some days in the gym with a combo of strength and cardio training, 2 days a week taking walks up to 7 miles at a time and biking on Sundays, pulling his developmentally-delayed grandson behind him in a trailer. With an emphasis on strength training, Burke echoes the sentiments of other older athletes when he says, “Getting older doesn’t mean we have to stop living. We just have to train harder.”

So clearly, hard work, commitment, and strength training all run through the athletic efforts of these three older men. What can those of us who share their age but lack the athletic drive take away from these examples? We don’t need to set athletic records or be profiled in the papers to benefit from exercise. Just regular movement will allow us to stay active, healthy, and resilient going forward. In fact, research assessing sedentary adults with progressive muscle disease during the pandemic confirms that lack of movement can be detrimental to the health of those of older age. The advice of these researchers? Even just 5 minutes of movement every hour can undo the harm from inactivity. Playing off the World Health Organization’s advice that “every move counts,” don’t worry about running a marathon: Just make sure to get up and move.