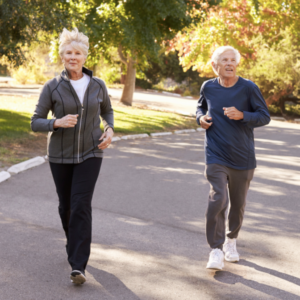 While it’s true that we do not really have prescription drugs or therapeutics to effectively prevent or slow down dementia, it’s not true that there’s nothing you can do if you’re at risk of cognitive impairment. In many ways, there are effective and practical tools for preventing or slowing cognitive decline- all within your own power- and include such lifestyle modifications as better eating, more sleep, and regular physical activity. In fact, exercise may be the single biggest boost to your brain (and body) to put yourself on the path toward healthier aging. For a long list of the benefits to be gained from moving your body, grab a sweatband and click here.

Recently, the National Institute on Aging (NIA) described a new study published in Nature Metabolism that investigated the hormone irisin, which is released into the bloodstream during exercise. This study suggests that with exercise, there is an increase in the level of irisin (which crosses the blood-brain barrier) in your bloodstream. Irisin was found (in mice studies) to boost cognitive performance and reduce neuroinflammation in the brain. With this new research, the NIA is positing that exercise may thus be a key component for boosting brain health in humans and improving cognitive performance, as well as reducing the risk of Alzheimer’s and cognitive decline. This study adds to our existing understanding of the value of exercise in boosting brainpower. As one example, a recent post in Live Science ticked off a number of ways that exercise is thought to be valuable for brain health, including robust blood flow through the brain which supplies oxygen, the essential element the brain needs for proper functioning.  And in a very recent post in Next Avenue, exercise is described as the #1 lifestyle intervention for slowing cognitive decline. Among the benefits described in this post is the maintenance of neuronal connections in the brain which are critical to preventing Alzheimer’s. While there is some debate about whether aerobic exercise versus resistance training provides the better cognitive benefit, there’s no debate about the need for the exercise to be strenuous in order to get your blood pumping. As one expert recommended, it’s critical to get your legs moving. “Your legs- not the heart- are the largest pump in the body and moving that blood changes the architecture of the brain’s vascular system. It makes it healthier.”

As to specific types of exercise? LiveStrong has a new list of the 8 best exercises for brain health, including HIIT (High-Intensity Interval Training), Dance and Trail Running. One other possibility they mention is “exergaming,” which blends the use of video games with physical movement. A recent post in Medical News Today cites a new study out of Belgium that found exergame training improved lower extremity and cognitive functioning in those with dementia symptoms. While you may not put this type of activity into the same category as running long distances or intense workouts at the gym, if it keeps you moving and building up a sweat, that’s all to the benefit of your brain. To find out more, grab your controller and read here.