Just Do It: Humans (Including Older Adults) Were Made To Keep Moving 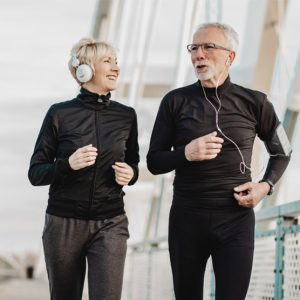 Just Do It: Humans (Including Older Adults) Were Made To Keep Moving

Getting older means we can slow down, right? Apparently not, according to new research by evolutionary biologist Daniel Lieberman at Harvard. We’ve come across Dr. Lieberman’s work previously on agebuzz, as he described the evolutionary purpose of our longevity to help younger generations survive and thrive. Now comes word from Dr. Lieberman and his colleagues that, given this evolutionary development in the human species, we now understand that physical activity (essential for that longevity) is not only valuable as we age but is absolutely essential for aging well.

As Dr. Lieberman explains, unlike most species (except for Orca whales), humans continue to live for a few decades after we’re finished reproducing. Our evolutionary development over time incorporated physical activity to help fuel and sustain this longevity– and this need for physical activity is now part and parcel of our human DNA. Through Dr. Lieberman’s work, we now understand that this ingrained need for physical activity can shift the energy in our body away from processes that can compromise our health and toward mechanisms that expand and enhance health. As Dr. Lieberman himself wrote in his study, “Physical activity promotes health by allocating energy away from potentially harmful overinvestments in fat storage and reproductive tissues and… stimulates energy allocation toward repair and maintenance processes.” To explain further, physical activity causes damage at the cellular, molecular, and tissue levels- but in response, our bodies work to repair this damage and build back stronger, helping us better tolerate the assaults of the aging process. In fact, as one article on this research explains, “Some of the diseases of old age are (actually) exacerbated by physical inactivity…we are stuck in bodies built for a different level of energy use and consumption.” So instead of giving yourself permission to take it easy,  Dr. Lieberman’s research suggests you need to keep moving as the years go by (and as biology intends) if you want to age in a healthier way.

Other recent research also validates the importance of movement for healthy aging. In a recent study out of Nottingham University School of Medicine in England, researchers discovered that as we move, our bodies produce a cannabis-like substance (called endocannabinoids) that changes the microbiome in our guts and thus helps calm inflammation in the body. As was explained by the founders of the Agewell project, the formula essentially boils down to this: muscle-strengthening exercise =endocannabinaoids=special gut microbes= reduced inflammation in the body. Since we know that exercise and movement already help us cope with such inflammatory conditions as arthritis, cancer, and heart disease, it makes sense that moving your body can be essential to thwarting some of the most inflammatory conditions that arise as we get older. For further insights into this research, take a look at this article from Medical News Today. To expand your understanding of the benefit of movement for both your mind and body, the Agewell project recommends you pick up a copy of the recent book Move!: The New Science of Body Over Mind by science journalist Caroline Williams.

Finally, as we previously wrote on agebuzz, getting physical activity and movement into your life doesn’t necessarily mean committing yourself to spend hours in formal training at the gym. In a new study out of Singapore and published in BMJ Open, researchers examined the value of sustained housework into your later years as a way to keep moving and maintain physical and cognitive functioning. Comparing older adults who reported heavy daily chores with those who did not, these researchers concluded that continuing to take on your household chores could help ward off disease and help prevent falls- though other experts caution that the evidence was not conclusive. So it’s possible that picking up a broom may not only help sweep away the dust but may also help sustain the body and mind. To learn more, take out your Swiffer and click here.