Work Up A Sweat: Your Aging Body Needs Exercise 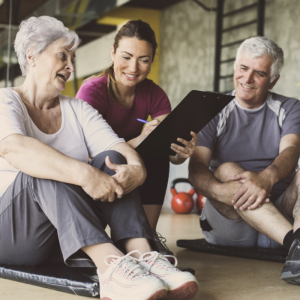 Work Up A Sweat: Your Aging Body Needs Exercise

It’s an old cliché: Use it or lose it, as the saying goes. Most of us know that exercise and movement are essential components for healthy aging. Yet many of us resist, making excuses and looking for reasons not to get up off the couch. Especially during the last several months, when there’s been concern about mingling outside or exposing yourself to others, there’s a built-in reason not to move those muscles and work up a sweat. But in the words of Dr. Daniel Lieberman, author of the upcoming book Exercised: Why Something We Never Evolved To Do Is Healthy And Rewarding, “A mountain of evidence suggests that the Fountain of Youth runs with sweat. That sweat, moreover, needs to keep flowing as we age.”

Lieberman knows from what he speaks. A Professor of Human Evolutionary Biology at Harvard, Lieberman’s anticipated book puts forth a new hypothesis about why we not only live well beyond our reproductive years but why fitness and physical activity are essential aspects of our evolutionary trend toward longer lives. According to Lieberman, there is the “grandmother hypothesis,” that suggests humans live beyond reproductive years to help younger progeny survive and thrive with support and wisdom. Implicit in this evolutionary advance was the hard physical work in those post-reproductive years that made such support possible. To paraphrase Lieberman, we evolved to toil by the sweat of our brows in middle and old age in order to live to be useful and helpful (not to retire and sit by the pool in Florida). As Lieberman ultimately states, “Human health and longevity are thus extended both by and for physical activity (emphasis added).” In essence, for a longer and healthier life, the need for physical activity is practically written into our DNA. To read more of Lieberman’s hypothesis click here and to see some of the advance praise for this new book, put on your sweatband, and read here.

And if you’re feeling as though you may be too late to hop on the evolutionary bandwagon of physical activity in your later years, meet Joan McDonald. At age 70, she began her transformation from couch potato to gym goddess, all under the tutelage of her adult daughter who’s a professional trainer. She’s a living and ultra-fit example that there’s no age limit on beginning exercise and reaping the physical and psychological rewards that come with it. With over 800,000 followers on her Instagram account and a website that includes her workout videos, she’s living proof of a phrase she often repeats: “You can’t turn back the clock but you can wind it up again.”