Wealth And Health: Your Money May Help You Live Longer 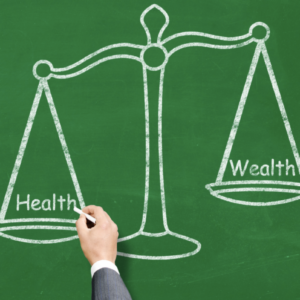 Wealth And Health: Your Money May Help You Live Longer

While it may be true that money can’t buy you love, two new studies seem to confirm that it can buy you a longer life- that, in fact, there’s a direct correlation between your wealth and your health, so that if you aspire to a long life, you may want to pay attention to your bank account as well.

First, a brand new study published in JAMA Health Forum looked at wealth accumulation in midlife and subsequent mortality and longevity. Probably of no surprise to anyone is that the researchers found that those who had accumulated a higher net worth at midlife had a lower mortality risk over the next 24 years of life. This study, involving over 5000 participants, specifically looked at the life spans of siblings or twins, so as to eliminate bias in the study due to inheritable traits or socioeconomic upbringing. As senior researcher Greg Miller concluded, “Our results suggest that building wealth is important for health at the individual level, even after accounting for where one starts out in life. So, from a public health perspective, policies that support and protect individuals’ ability to achieve financial security are needed.”

Second, a recent study published in JAMA Cardiology examines the connection between midlife wealth and cardiovascular health. Researchers found that upward or downward changes in wealth were associated with respective lower or higher levels of cardiovascular events. As you can imagine, the more your wealth accumulates, the lower your risk of heart health trouble. In fact, as one researcher said, “wealth and health are so closely integrated that we can no longer consider them apart.” It was even recommended that health policy initiatives going forward consider how to buffer significant downward wealth changes so as to lessen their health effects. Another researcher posited, “Could paying off one’s debt with a large relative wealth increase be important in promoting cardiovascular health, even without changes in income?”

That’s an interesting point, given the wealth accumulation that currently exists in the baby boomer population. According to a recent article in the Wall Street Journal (paywall), older Americans have stockpiled a record $35 trillion and according to many, it may be time to give some of it away. In fact, it appears that wealthier individuals are giving away money even before death leads to inheritances for their heirs. With changes in gift-tax exemptions, large gifts have already started to be given, bringing financial stability to younger generations and allowing others to take risks previously out of reach. Given the research that now suggests a strong connection between wealth and health, it may also be time to use the tax code so that health advances can accompany the wealth advances of future generations!