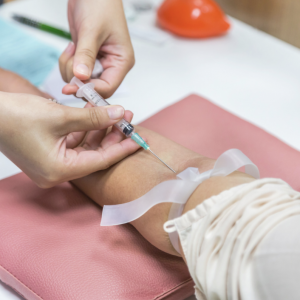 Receiving a diagnosis of Alzheimer’s is often the end result of a long and difficult process begun when memory or cognition begins to deteriorate and when other types of dementia are ruled out. What’s more, by the time a diagnosis is made there are likely few effective therapeutic options for treating the symptoms. In fact, up until recently, a definitive diagnosis of Alzheimer’s really couldn’t be made until the patient died and underwent an autopsy. While there are now various scans that can bring more certainty to an Alzheimer’s diagnosis, they’re expensive and invasive, and not accessible to many patients. That’s why the search has gone on for an easy-to-administer, inexpensive blood test to determine the presence of Alzheimer’s, and why the newly published study in JAMA about the discovery of a blood test is causing such excitement.

This new blood test, anticipated to be clinically available within 2-3 years, appears to be accurate in diagnosing Alzheimer’s (as distinct from other dementias) and appears to have a high accuracy rate even in people who do not yet show clinical symptoms of Alzheimer’s. It works by detecting the tau proteins in the brain rather than focusing on the amyloid protein, which has largely been the focus of much of the failed Alzheimer’s research to date. While additional clinical trials of this blood test need to be done in more diverse populations, the potential availability of the test is creating tremendous anticipation, both in research and clinical settings. It may accelerate the search for more effective therapies and allow patients and families to better plan for the future or consider enrolling in clinical trials. However, until there are effective therapeutic options for Alzheimer’s, it’s not clear this test should be used as a screening tool for people who have no symptoms or genetic predisposition. It remains ethically debatable whether receiving a confirmed diagnosis of Alzheimer’s is helpful or just anxiety-provoking if there’s nothing yet available and beneficial to offer a patient.

However, once real effective therapies begin to arise, this sort of blood test, which may be able to diagnose Alzheimer’s decades before the onset of symptoms, will be absolutely life-changing. The ease of its use and the likely low cost for such a test will make it much more accessible to the tens of thousands of patients diagnosed each year. This is especially valuable, given that the current use of brain scans to diagnose Alzheimer’s may not be covered by Medicare due to their expense. As well, the promise of this blood test is that it may allow for interventions well before the ravages of Alzheimer’s have caused irreparable damage to the brain. And for that, we have to be grateful and hopeful that it comes to market as soon as possible.