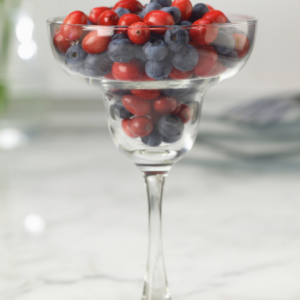 While we have no choice but to wait for medications or interventions that can cure dementia, we are not without weapons in our arsenal to reduce the risk of this scourge. As we’ve previously reiterated, there are a host of lifestyle interventions that may not cure dementia but are known to lower your risk or even slow down the progression of dementia once it takes hold. And now comes more evidence that several common types of berries, along with other healthy foods, may help lower your dementia risk as well.

First, consider the cranberry. According to new research out of the University of East Anglia (UK) and published in Frontiers in Nutrition, cranberries are not only a superfood for their ability to combat urinary tract infections and heart disease, but it now appears that they may be neuroprotective, and the rich antioxidant nutrients in cranberries may help improve memory and brain function along with lowering “bad” cholesterol. For this research, scientists followed 60 cognitively healthy participants (ages 50-80) for 12 weeks- half of whom consumed the equivalent of a cup of cranberries per day while the other half were given a placebo. At the end of the 12-week period, the cranberry group showed significant improvement in their memory of everyday events along with a significant decrease in LDL or “bad” cholesterol. As one of the researchers made clear, “Foods rich in anthocyanins and proanthocyanidins, which give berries their red, blue and purple color, have been found to improve cognition.” So pour yourself some cranberry juice and read more here.

Similarly, recent research on blueberries has also found that blueberry consumption may reduce the risk of dementia. This research, coming out of the University of Cincinnati and published in the journal Nutrients, focused on middle-aged populations (ages 50-65) who were overweight, prediabetic, and reported mild memory decline. Blueberries also have high levels of anthocyanins, and in this study population, the consumption of the equivalent of ½ cup of blueberries per day over 12 weeks led to improvement in cognitive tasks that depend on executive control. The takeaway? Supplementing your diet with blueberries during your middle-age years may lower your risk of developing dementia later in life. To find out more, grab a handful and read here and here. And if you’re thinking you can combine these research findings into a delicious Memorial Day dessert, pull out your baking dish and click here.

Finally, one other piece of research connecting food and dementia risk: According to research coming from the National Institutes of Health, and published in the journal Neurology, it appears that some antioxidants (found in foods such as kale and spinach) may protect against neurodegeneration and were associated with a lower risk of dementia, including Alzheimer’s. Participants ages 45-90 were followed for an average of 16-17 years, and it appears that these antioxidants may help protect brain cells from damage, thus lessening the risk of dementia. While this research needs further validation through randomized clinical trials, it does once again point to an association between certain nutrient-rich foods and a reduced dementia risk. To find out more, read here.