Get It On: Sex And Romance As Older Adults 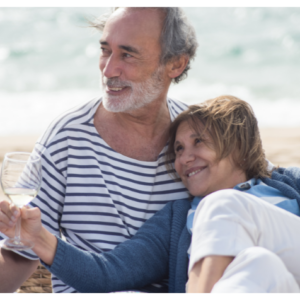 Get It On: Sex And Romance As Older Adults

While it may come as a surprise to young people, older adults- even very old adults- continue to have sex into their later years. While not universal, the numbers are still impressive. According to the National Poll on Health Aging, 40% of adults between the ages of 65-80 say they are sexually active, with those at the younger end of that spectrum more active than those approaching age 80. However, it’s not uncommon that health concerns get in the way of an active sex life among older adults, including menopause symptoms, hormonal changes, physical body problems, disability, or medications. But as baby boomers broke sexual barriers during the 1960s and 1970s, so too are many defying expectations as they get older. As one expert makes clear, “People are living longer and they’re having sex longer.” For a comprehensive review of sex and aging, pull down the blinds and click here.

But of course, sex alone isn’t the only factor that supports a happy relationship. For example, a recent study out of UC Berkley reports that among long-married couples, sweet moments of humor and affection- known as positivity resonance- not only support loving relationships but can help sustain better health and longer lives, in comparison to couples who quarrel a lot. As described in a recent post in MD Linx, “Positivity resonance occurs when two people momentarily experience a mutual biological and behavioral surge of warmth, humor, and affection and achieve a sense of oneness.” This level of connection helps create intimacy and long-lasting, loving relationships well into your later years. And for further advice about how to stay happy and keep the spark alive well into your older age, consider the advice of married centenarians June and Hubert Malicote, who, after approaching their 80th year of marriage, still are deeply in love with each other. Their advice for a long-term loving relationship? “They always share a kiss before bedtime and whenever a disagreement arises, they take a time out from each other before talking it through.” No word on their sex life at this point, but they truly have enjoyed a life of love about which we can all be envious!