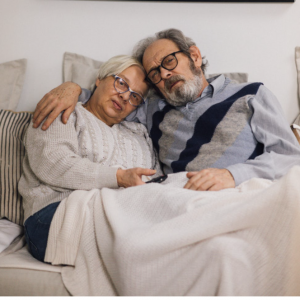 Raise your hand if you believe you watched an “unhealthy” amount of network television or streaming content during the pandemic. While there’s no doubt that many of us were in desperate search of something to keep us distracted and entertained while we remained on lockdown, the question is whether we watched “too much” and if so, what are the consequences of all that extended time in front of the television? While there is data to support the potential benefits of watching select television programs– for example, the positive emotions that are stirred from enjoyable programs can benefit your well-being- there is also concern that random scrolling or uncontrolled binge-watching can lead us to neglect activities that might be healthier. And now we have several new research studies suggesting the sedentary, passive nature of long hours of television watching may harm our long-term brain health.

Three new research studies presented at the recent American Heart Association conference all lead to a similar conclusion: “People who reported watching moderate to large amounts of television in their 40s, 50s and early 60s experienced greater cognitive declines, and had lower volumes of gray matter in their brains, in their 70s and 80s, compared with people who reported watching very little television in midlife.” In fact, researchers calculated that each one-hour increase in a person’s daily average television viewing was tied to a .5% reduction in gray matter volume. While these studies found a correlation, not causation, between television watching and later in life cognition, the researchers believe it’s not so much the watching that’s the problem. Rather, it’s hypothesized that the sedentary, passive nature of watching wreaks havoc in your brain. More stimulating sedentary behaviors- like computer games or reading- may be beneficial for cognition. But zoning out in front of the tv with no real engagement in what you’re watching- for long hours every day- does not bode well for your long-term cognition. So put down the remote and read more here.

What about those who watch several hours of tv a day AND fall asleep in the evening with the tv on? Is that harmful to your health? Generally speaking, we already know how critically important sleep is to maintain good health. Experts seem to agree that sleeping with the tv on is likely to negatively impact the quality of your sleep and thus should be avoided if possible. With the tv on, you might be getting less sleep than you realize, you’re decreasing your body’s melatonin production (the hormone that helps with sleep) and you’re potentially keeping your brain stimulated enough so that it won’t achieve the deep, restful sleep essential for good health. While some may view the television as a source of “white noise” useful to help you fall asleep, experts suggest that you then set a timer for the tv to automatically turn itself off, or, at a minimum, program the tv to play something calming and comforting that’s less likely to stimulate your brain. In fact, interestingly enough, it’s been reported that Netflix and HBO are now developing content to calm you down at day’s end and lull you to sleep. So it may soon be possible to count (movie) stars, rather than sheep, on your way to a good night’s sleep.