The Eyes Have It: The Link Between Aging And Eye Care 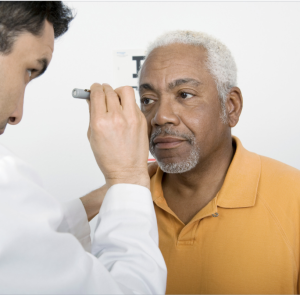 The Eyes Have It: The Link Between Aging And Eye Care

There’s a traditional proverb that the eyes are a window into your soul. While that may be more metaphorical than actual, there is growing evidence that your eyes can provide a window into your health and well-being, and perhaps even send out early warning signals of trouble that may lay ahead. As a growing number of studies suggest, proper eye care and attention to potential eye problems as you age may also contribute to healthier aging more generally. For a general overview of how aging affects your eyes, grab your glasses and look here.

It’s important to understand that a number of eye diseases, including age-related macular degeneration (AMD), cataracts, and diabetes-related eye disease are all linked to a higher risk of dementia. In a recent study published in the British Journal of Ophthalmology, researchers found that among the 12,000 participants, ages 55-73, who were followed for up to 15 years, those diagnosed with AMD had a 26% higher risk of dementia, and those whose eye disease was linked to diabetes had a 61% higher incidence of dementia. One hypothesis is that the reduced activation of the brain’s sensory pathways due to disease was a reason for the higher dementia risk. There’s also new research published in JAMA Internal Medicine that older adults who have undergone cataract removal with vision restoration have a lower risk of Alzheimer’s and other dementias than those whose cataracts are not removed. This observational study contributes to the growing body of evidence that sensory loss- such as vision or hearing – may contribute to cognitive decline, as those with such loss withdraw from social engagement or intellectual pursuits. Or, according to another hypothesis, impaired vision may lead to less input into the brain, causing brain shrinkage (which is also associated with higher dementia risk). Either way, these studies make clear that regular eye care and vision maintenance may directly cut your risk of dementia. To find out more, click here.

Age-related macular degeneration is the most common cause of vision loss in those over 60. It’s estimated that more than 11 million older adults in the US suffer from this and globally, that number rises to 170 million. Currently, AMD is often undiagnosed until real vision problems have already set in. If diagnosis could be made earlier, it is possible that more vision could be preserved. A new study out of the University of Southampton and King’s College London raises hope that earlier diagnosis may soon be a reality, by examining genetic risk factors along with retinal scans. Those who possessed genetic risk factors for AMD appeared to have thinner retinas, allowing researchers to obtain a better understanding of earlier stages of AMD. With this insight, they may eventually be able to pursue earlier treatments and preserve more vision. There’s also new research out of UC Davis, published in Nutrients, that consumption of a small number of dried goji berries may help to protect the eyes from the vision loss associated with AMD. While further research needs to be conducted, this identification of protective nutrients may someday thwart the ravages of this eye disease, which causes loss of central vision and the inability to read or recognize faces. For some personal stories of what it’s like to live with AMD, watch here and here.

Finally, retinal scans have now also been studied as a marker for a patient’s more general health status and potential mortality risk. In new research published in the British Journal of Ophthalmology, the concept of a “retinal age gap” as a predictor of mortality risk was studied. What the researchers are proposing is that a non-invasive eye scan, analyzed with Artificial Intelligence, may be a new screening tool to assess the condition and “age” of the retina, in comparison to the patient’s chronological age, and thereby determine whether the patient is at increased risk of death from certain causes. In essence, the retina is the only place in the body where a non-invasive exam can allow you to examine blood vessels. Observed damage to retinal tissue or retinal blood vessels is often a sign of broader systemic disease. Thus a retinal scan may be a useful screening tool to identify preventive or proactive measures. To find out more, cover one eye and read here.