Sense-Less: The Connection Between Diminished Senses And Dementia 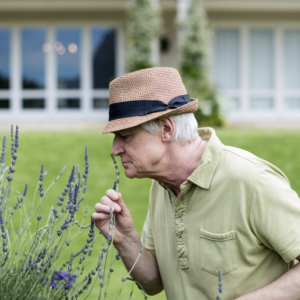 Sense-Less: The Connection Between Diminished Senses And Dementia

As previously reported in agebuzz, loss of multiple senses as you age is often considered an unfortunate aspect of aging- yet it’s not something to be accepted as inevitable or untreatable. That’s especially important now that 2 new research studies have shown an association between worsening sensory functions (such as vision and hearing) and accelerated cognitive decline and risk for dementia.

First, there’s a new study out of the University of Washington that reports that older adults with both hearing and visual impairment have a 90% higher risk of developing dementia. As one of the researchers stated, “Evaluation of vision and hearing in older adults may predict who will develop dementia and Alzheimer’s.” Given recent estimates that up to 1 in 5 adults over 70 have impairment in both hearing and vision, this study raises important implications for treating such impairments and thus lessening the risk for cognitive decline.

Moreover, in another new study from the University of California at San Francisco, 1800 adults between the ages of 70-79 were followed for up to 10 years to track the impact of multiple sensory decline and cognitive function. The study’s authors found that even mild levels of sensory impairment were associated with accelerated cognitive decline. In particular, the researchers determined that the loss of smell had an even stronger association with the development of dementia than the loss of hearing, vision, or touch. Finding that research participants whose sense of smell declined by 10% had a 19% higher chance of dementia, the researchers concluded that “smell may be a preclinical indicator (of the onset) of dementia.” So, if you’re having trouble smelling the roses, you may want to start further investigation here.