Push The Positive: Promoting Age As An Asset Rather Than A Liability 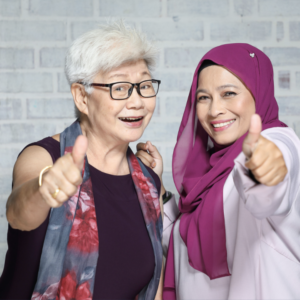 Push The Positive: Promoting Age As An Asset Rather Than A Liability

Despite the growing number of older adults in our population, it seems that many of us in our later years still face strong headwinds when it comes to bucking ageist attitudes. While only comprising 16% of the population in 2017, adults over age 60 will constitute 22% of the population by 2050. With our growing numbers, it would seem prevailing attitudes, stereotypes, and biases against older adults should fall by the wayside- after all, if they’re lucky, younger generations will join our ranks in the decades to come and should plan accordingly. Yet, as a recently updated research paper from USC points out, “Every person who grows old is likely to be the target of ageism at some point in their life.” What gives with these ageist attitudes?

Certainly, the stereotypes don’t jive with the reality lived by most older adults. For example, despite humiliating marketing images of feebleness, sensory deprivation, or cognitive decline, most older adults (more than 75% of those over 65) do not have cognitive, hearing, vision, or self-care impairments, and only 5% of older adults live in long term care facilities. And in the workplace, the number of older workers has grown by 117% in the last 20 years. Yet older workers, such as Michael Lubell writing in Next Avenue, continuously find the environment hostile, despite the wisdom and experience they bring to the workplace. As Lubell decried, “As someone in my 60s, I’ve been living with ageism for years while looking for work, without writing or complaining much and it is quite simply time to speak up.”

Well, it appears there are people listening and responding. In the work world, it seems like some ageist attitudes may be finally starting to crumble. As we previously posted, there’s now a dedicated platform (xBound) to connect employers and businesses in need of help with seasoned/experienced older employees. Furthermore, Kerry Hannon, a strategist and author on navigating the work world as an older person, recently profiled activities in Colorado that set the state apart in its efforts to help understaffed businesses to connect with experienced workers over age 50. With the attitude of “age is an asset,” Hannon makes the case that it’s not only good for business but good for society when all people- including older adults- are fully appreciated for their talents and contributions.

And in the realms of marketing and entertainment, more experts are promoting an embrace of our aging society as a smart business maneuver. A recent article in the Harvard Business Review had an important message for those in the marketplace: aging populations are incredibly diverse and it makes no sense to exclude them or pander to them with stereotypical, outdated messages. Their suggestions? Ditch the stereotypes and promote the positive aspects of aging that so many will relate to, especially with meaningful material and messages. In fact, demographic experts suggest we give up on stratifying segments of the population altogether and cast aside such categories as “The Silent Generation,” “Baby Boomers,” or even “Millennials.” Using broad categories based on one’s year of birth does little to recognize the complexity and nuance that has shaped people born in different decades.

Those clinging to ageist attitudes have little leg to stand on at this point. As a recent article in LA Magazine made clear, there’s little way to avoid engaging with and satisfying the needs of older adults at this point: “Folks over 50—and there are 113 million of them in the U.S.—own 70 percent of the wealth, purchasing an estimated $5.6 trillion a year in goods and services. Together, boomers and Xers—let’s call them Xoomers—buy more cars, spend more on luxury travel, and own more electronics and homes than any other age group, accounting for a whopping 40 to 50 percent of all consumer spending.” For the business world, that’s simply too large a percentage of the population to turn off with ageist attitudes. Better to embrace and engage with older consumers, using positive representations of aging, then employ ageist stereotypes out of place with the 21st-century experience of aging.