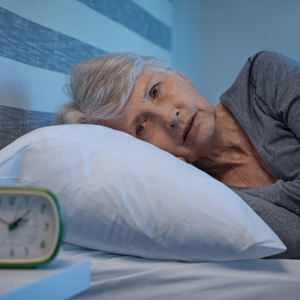 There’s an Irish proverb that says, “A good laugh and a long sleep are the two best cures for anything.’’ But for those who suffer from sleep apnea (some 18 million US adults), getting a good night’s sleep is often an elusive dream. For a review of what is sleep apnea and why it’s presence can be so pernicious, prop open your eyes and look here. And for more general resources on sleep as an older adult, check out the agebuzz helpful sleep resources here.

The health consequences of obstructive sleep apnea (the more common type) can be significant, beyond the predictable fatigue that accompanies insufficient sleep. Cardiovascular problems may arise, and new research finds evidence of increased incidence of major depression and other mental health issues, in those with sleep apnea. Not to mention the disrupted sleep of those whose partners have sleep apnea.

But there do seem to be some treatment breakthroughs on the horizon, especially for those who do not find traditional CPAP machines effective or viable. For example, researchers at Case Western Reserve are experimenting with the use of electrical wires to activate airway opening circuits in the brain similar to the way a pacemaker stimulates cardiac activity. With perhaps more immediate application, Dr. Eric Kezirian, a sleep surgeon from USC, touts the success he has had with patients using an upper airway stimulation device which can be surgically implanted. The device stimulates the tongue to move forward and allow space for breathing in a patient with sleep apnea. To find out more, open wide and read here.

A Woman With A Plan: 71-Year-Old CoverGirl Maye Musk Tells All And Shares Advice

Break Away: Lowering Your Risk Of Falls And Fractures