Have A Laugh: Comedy In The Lives Of Seniors - agebuzz

Have A Laugh: Comedy In The Lives Of Seniors 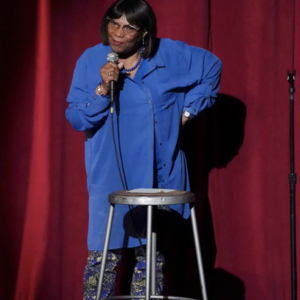 Have A Laugh: Comedy In The Lives Of Seniors

There’s been little to laugh about over the past two years, with our political system in turmoil, our climate on the brink of disaster, and our public health system in tatters with the arrival of the pandemic. Add to that the isolation and loneliness that so many, especially older adults, experienced during COVID and you’d be hard-pressed to find something that tickles your funny bone. While we’ve touched on the health benefits of laughter in previous posts, and there’s data to support the value to health to be derived from laughter, it’s not usually something we turn to when we’re ailing or feeling unwell. Yet, thankfully, there are a handful of comedians who, over the last few years, have turned to comedy to lift up those who may be struggling.

First, consider comedian and UCLA comedy instructor Dani Klein Modisett. She is the CEO and Founder of the group Laughter on Call, a concept she originally created to respond to the loneliness and isolation her mother experienced as an Alzheimer’s patient living in a strange new environment. Using humor and provoking laughter as a way to make people feel seen, connected, and less alone, the group morphed into a much broader organization once the pandemic took hold. With caregiver training, family workshops, and improv training for older adults, Laughter on Call uses humor and comedy in innovative ways to connect to isolated seniors. With a network of over 500 comedians now working with Laughter on Call, older adults around the country and their caregivers can access support (and silliness) as a way to connect and uplift each other. For more on this organization and its work, click here.

On the other side of the country, comedian and comedy writer Jo Firestone had her own “aha” moment in the early days of the pandemic. Without much work and looking for a meaningful way to spend her time, she began teaching stand-up comedy workshops specifically for older adults at the Greenwich House Senior Center in New York City. What was originally a 13-week commitment on Firestone’s part has now been going on for two years, with no signs of stopping. Further, the Zoom classes and subsequent live comedy performances of her original 16 students have now been captured in a new documentary, Good Timing With Jo Firestone, now premiering on Peacock. For 50 wonderful minutes (and for free) you can watch Firestone coax her students into funny storytelling and both intentional and unintentional humor as they share their innermost thoughts and the day-to-day realities of living into their later years. You’ll also see these 16 students perform live before an audience of friends and family and you’ll truly come to understand why laughter may be the best medicine. To find out more about Jo Firestone and her classes, click here, and to watch the Official Trailer for this documentary, grab some popcorn and watch here.