Fun And Games: New Video Games That May Build Up Brain Health 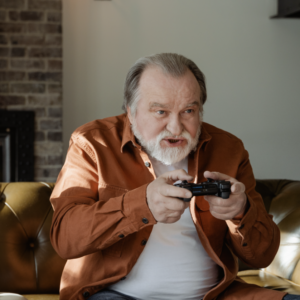 Fun And Games: New Video Games That May Build Up Brain Health

Despite the popularity of word games, crossword puzzles, and other brain challenges, we’ve reported that the scientific evidence that such games boost and improve cognitive function and memory is mixed. Nonetheless, there’s a lot of support for “exercising” your mind just as you undertake physical activity in order to support healthy aging in your body. And now comes word that researchers are pushing to demonstrate that newly developed video “games” and “exergaming” challenges can be therapeutically useful in forestalling cognitive decline or building back brain connections that may diminish with age.

For example, consider the research being undertaken by a University of Utah professor, Sarah Shizuko Morimoto. Using a “software instead of pills” approach to geriatric depression and cognitive disorders, Dr. Morimoto has worked to develop a video game called “Neurogrow” through which players tend to the changing conditions and demands of a virtual garden while thereby strengthening circuits in the front of their brains. Awarded a multi-million dollar grant by the National Mental Health Institute to test her hypothesis about the value of “gaming” to improve cognitive functioning and combat depression in older adults, Dr. Morimoto’s work has already led to significant cognitive improvements in individual trial participants. For more on this pioneering work and its promise, grab your controller and click here.

Other researchers are pursuing pioneering usage of tech-supported brain games as a way to preserve and enhance cognitive functions. Another study, known as the US Pointer Study, is employing computer-based brain exercises, accompanied by a healthy diet, physical activity, and social interaction, to determine if this combination can stave off dementia for those who may be most at risk. The hope is that this combination of interventions can sufficiently impact brain biology to permit older adults to function independently longer than they might otherwise. Read more about this study here. And take a look at some of these games from Brain HQ, which are currently being tested in Alzheimer’s trials around the country to determine their value in enhancing memory, attention, and reaction skills during chaotic situations.

Some brain health centers are also employing virtual reality technology, video game technology, and physical activity all together to try to support and enhance brain functioning in older adults. For example, at the Pacific Brain Health Center in California, there is a “high tech” gym for older adults which uses virtual reality exergaming to improve and even prevent memory loss. The goal is to make these “pedal and play games” fun and cognitively challenging so that eventually seniors around the country will have easy access to brain-boosting activities that they can engage in at a local gym or community center. For more on these efforts, take a look here.

In the meantime, if you’re still looking to engage your mind and potentially boost your brain function, there are always low-tech options available requiring little more than a smartphone or iPad. For some easy-to-access and free options, turn on your tablet and click here.