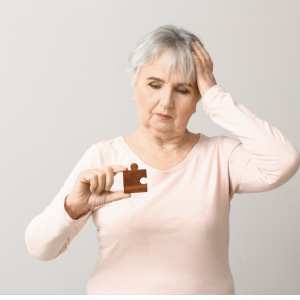 It may be difficult to hear that you are at risk of dementia, or even worse, to actually receive a dementia diagnosis. Currently, it’s estimated that 50 million people worldwide suffer from dementia, with that number expected to rise to 82 million cases globally by the year 2030. We know that fear of receiving such a diagnosis often overshadows reality- While ½ of adults over 40 fear they will get dementia, in fact, only 12% actually do. Yet we also now have evidence that dementia may be much more common than we previously realized, due to lack of a formal documented diagnosis. In a new study, researchers from the University of Michigan found a large discrepancy between the number of people living with cognitive impairment, consistent with dementia, and the number of those who actually received a dementia diagnosis. Perhaps that’s not surprising given that dementia screening does not regularly take place during wellness visits, which may partly account for this discrepancy.

But there’s also evidence from a survey by AARP that health care providers often mistakenly presume that patients would not want to be told about a dementia diagnosis, which may make providers less inclined to screen for it in the first place. This new survey showed that while 7 out of 10 health care providers assumed their patients would be ashamed or embarrassed to be diagnosed with dementia, only one in five patients actually feel that way. So the prevailing myths and misunderstandings about dementia and its diagnosis may be leading us to undercount- and undertreat- those who might benefit from early intervention and lifestyle changes. This is especially true because we know that for many, living with a dementia diagnosis can often be more akin to managing a chronic illness, with many years of good quality of life before problems set in and much that can be done to change behavior and practice preventive care.

The good news is that there is a tool available that allows you to take matters into your own hands. Just released, the “Dementia Calculator,” is an easy-to-use computer-based diagnostic survey that can assess your risk of being diagnosed with dementia in the next five years through a series of questions about diet, exercise, and other lifestyle behaviors. Developed by researchers from Ottawa Hospital and the University of Ottawa, this new tool joins other types of health calculators that allow individuals to better assess their own health risks. The goal with this dementia calculator is to allow individuals over age 55 to better understand their risk of dementia within the next 5 years so that they can take control and implement healthier lifestyle behaviors. Given that ⅓ of dementia cases may be preventable through such changes in behavior, this is an exciting opportunity for individuals to assert some control of their futures.

And for those who do face the risk of dementia, Medical News Today recently sat down with some leading dementia experts to gauge what exciting research advances are coming down the pike. There’s a lot to anticipate between medications, advanced biological understanding, and efforts to better understand the dementia experience. To find out more, click here.

The ABCs of CBD: An Interview With CBD Producer Bonnie Hagen, Founder of Bright Energy Wellness

Keep It Up: Regardless Of Age Or Weather, You Need To Keep Exercising

Straightforward And Simple: Cosmetic And Skin Products For Mature Faces