Caution Before Swallowing: Researchers Find Too Much Aspirin Use In Older Adults 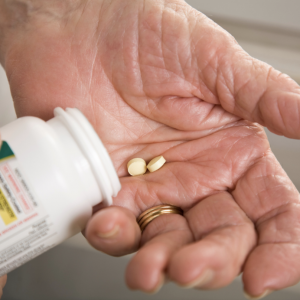 Caution Before Swallowing: Researchers Find Too Much Aspirin Use In Older Adults

Most of us likely grew up with aspirin as a regularly used medication in our households. Whether the good old-fashioned Bayer brand or one of the other commercially available aspirin-based brands like “Bufferin” or “Anacin,” most of us can remember our parents taking or recommending a tablet for headache or flu relief, menstrual cramps, or arthritis. As a readily available over-the-counter medication, aspirin was an easy-to-take drug that promised a lot of relief in one little pill. For a good history and overview of aspirin, its potential value, and the risks we now recognize, open your medicine cabinet and click here and here.

But the evidence of the risks from taking aspirin has been building and we’ve previously covered it in agebuzz. Even with the moniker “baby,” aspirin can be a potent medication that can have serious side effects, including increased risk of bleeding, stroke, and ulcers in certain populations. For a while now, the recommendations have been clear: that the use of aspirin as a preventive medication for cardiovascular incidents such as heart attack or stroke should be done under physician supervision and limited to certain patients. Now comes new research that suggests that many are ignoring these recommendations and that millions of patients are likely using aspirin for little-to-no benefit and with many risks to their health.

Given the ongoing debate about the value of aspirin, researchers undertook a study to determine the extent of its use and whether such use was in keeping with current guidelines. Published in a recent edition of JAMA Network Open, the study revealed disturbing evidence. Examining US adults ages 60 and over both with and without diabetes, the researchers found that 42.2% of adults without diabetes report aspirin use while 61.7% of older adults with diabetes report aspirin use. This comes from self-reported low-dose aspirin therapy based either on a physician’s recommendation or their own decision to use the drug. In fact, estimates are that currently about ½ of all older adults are using aspirin as a preventive measure for their cardiac health. However, the researchers report that according to current guidelines, this means that close to 10 million older adults should no longer be taking aspirin. So the excess usage found in the study is a worrisome sign.

Evidence has mounted in recent years about the increased risk aspirin poses in those over 70, in comparison to its benefits.  As one of the study experts made clear, “The results suggest the prevalence of aspirin use among older US adults is high among populations at an increased risk of harm, particularly older individuals and individuals with diabetes, who are already at risk for increased bleeding compared with those without diabetes.” Dr. Rita Kalyani, one of the lead researchers, explicitly stated, “Many professional societies have now discouraged routine use of aspirin for primary prevention of (heart) disease in adults aged 70 years old and older based on recent evidence.” The bottom line then? For those taking aspirin, especially if you were prescribed it long ago for the prevention of primary heart disease, it’s time to re-check with your physician to see if the benefits of continued use outweigh the risks of bleeding, ulcers, and other potential harms. Make sure your physician is aware of your aspirin use, as the research suggests this is a somewhat neglected form of drug usage and oversight among both older patients and their providers. To be clear, see whether your continued use of aspirin is still warranted, given the risks- better to be safe than sorry.