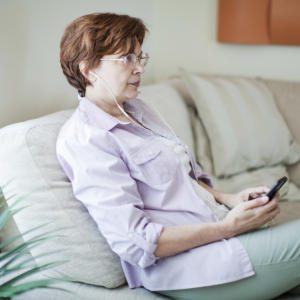 Tired of television? Zoned out on streaming? Looking for entertainment that doesn’t tie you to a chair for several hours? If so, it’s time once again to dive into the world of podcasts. For the uninitiated, we’ve previously supplied a primer on everything you need to know to get yourself set up to listen to podcasts. And this past fall, we encouraged you with an engaging list of some of the more insightful podcasts available, especially as they relate to aging. Now it’s time to provide you with a new and updated list of some additional podcast options, with topics from dating to designers- and from aging to enhancing your brain function- all produced to enlighten you through your ears while allowing you to multitask in the process.

For a start, let’s revisit an earlier recommended podcast, which now has many more episodes and companion pieces as well. Previously we introduced you to Death, Sex and Money from WNYC, with a particular focus on their series about life after 60. Recently, they developed a “call-in” episode, during which listeners share their personal and sometimes provocative stories about aging at this moment. And as a companion to this episode, WNYC links to other fascinating podcasts and posts dealing with a variety of current topics related to aging. Finally, another WNYC program, The Takeaway, has a valuable program entitled, “The Cognitive Benefits of Learning New Skills as an Older Adult.” You’ll find the latest research on the benefit of learning new things in your later years and how those new skills will allow you to live independently. Finally, continuing on the theme of living while aging, you may find the podcast Dating While Gray to be of interest. It’s another public radio podcast hosted by writer Laura Stassie who finds herself divorced and dating in her later years.

If you’re looking for podcasts to broaden your horizons beyond your immediate concerns with aging, we’ve got those for you as well. For example, W magazine has a list of its best podcasts to listen to in 2021, featuring such unlikely co-hosts as Bill Gates and Rashida Jones (Who Ask Big Questions),  MSNBC host Chris Hayes ( Why Is This Happening), and another from WNYC, Dolly Parton’s America (with host Jad Abumrad from the podcast Radiolab.) Alternatively, Forbes has its own list of the top podcasts of 2021. Included on their list?  Everything from The Unmistakable Creative described as, “A corner of the internet for creatives, misfits, and people who don’t feel like they belong anywhere else,” and hosted by Srini Rao to The Genius Life with Max Lugavere, hosted by Max Lugavere, a New York Times best-selling author (Genius Foods: Become Smarter, Happier, and More Productive While Protecting Your Brain for Life), filmmaker and health and science journalist.

So take some time for yourself, strap on your headset, get outside for a walk or start your daily chores with a podcast companion!