Another Round? More Evidence of Alcohol’s Impact On Aging Brains And Bodies 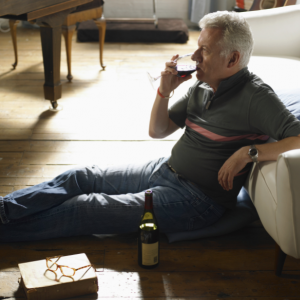 Another Round? More Evidence of Alcohol’s Impact On Aging Brains And Bodies

We know the evidence has gone back and forth about the benefits and harms that can come from alcohol consumption. While there’s no data to support the value of heavy drinking, there are some studies that suggest moderate amounts of alcohol may have cardiac or brain benefits. Current alcohol intake recommendations suggest that 1 drink/day or less for women, and 2 drinks/day or less for men, are safe levels of consumption. However, new evidence suggests that even that amount of alcohol intake may pose a serious risk of brain damage and cardiac problems in certain populations. Beyond that, new survey results suggest alcohol consumption increased to worrisome levels among some older adults during COVID. All that suggests it’s important to review the evidence and better understand the risks that alcohol intake poses to both body and brain. As a way to test your knowledge, try this AARP quiz on alcohol intake here.

First, the uptick in consumption during COVID. New survey results from the University of Michigan National Poll on Healthy Aging suggest that among some adults, COVID created unsafe alcohol consumption behaviors. While the survey showed that the majority of older adults do not drink alcohol or drink in low-moderate levels, as defined above, about 14% of respondents (ages 50-80) reported an increase in their alcohol consumption from the start of COVID in March 2020 to the start of vaccinations in January 2021. Men were more likely to report higher amounts of drinking than women, and lack of companionship was associated with an uptick in drinking. Given that older adults cannot process alcohol the way they could when they were younger, there is always a concern that excessive drinking could exacerbate the risk of falls and memory loss in older adults.

We also have new data suggesting the risk of harm to the brain posed by even moderate amounts of alcohol. In a new observational study out of the University of Oxford, the brains of 25,000 British residents were scanned to determine the detrimental effects of alcohol (wine, beer, or liquor) even with moderate consumption. Given that drinking alcohol is a “modifiable” behavior, these researchers suggest there may be no harmless level of alcohol consumption, especially for those already at risk for dementia, such as those with underlying weight or obesity issues. They suggest if we can eliminate this risk, we should. To find out more about this study, put down that highball glass and click here.

We also have new research from the recent scientific meetings of the American College of Cardiology that reports that “Alcohol appears to have an immediate—or near-immediate—effect on heart rhythm, significantly increasing the chance that an episode of atrial fibrillation (AFib) will occur.” According to this research, even one glass of alcohol could pose a serious risk for people who already have this heart rhythm disorder. In fact, just one glass of beer, wine, or liquor doubles the risk of a heart rhythm disturbance occurring within the 4 hours following the alcohol consumption. More alcohol ups the risks further. Given that nearly 3 million people live with heart rhythm disorders, this suggests many people could be at increased risk of blood clots, poor blood flow, or even stroke, all resulting from heart rhythm disturbances, because of their alcohol consumption.

So how do we convince those who enjoy a regular glass or two (or more) of alcohol that they need to limit- or even potentially eliminate- that consumption? Researchers from the Georgia Institute For Global Health have an idea. According to their recent study, one simple way to reduce alcohol intake is to make sure that drinkers understand the link between alcohol consumption and cancer- in fact, making sure drinkers understood the connection between alcohol being a carcinogen and their increased risk of cancer the more they drink, seemed to be a message that resonated in this study. To find out more, click here.