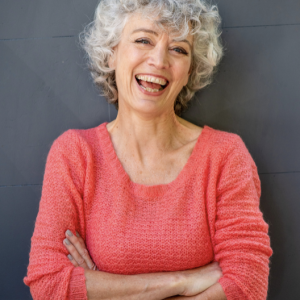 The pressure is real for so many of us who have crossed that line (wherever it runs) from middle-aged to the next stage. When we see women in their 50s like Jennifer Lopez or Nicole Kidman look slim and glamorous, it’s hard not to take note of the fact that most of us will never look like that again (if we ever did!) though the societal expectation is somehow that we have “failed” if we no longer have the “beauty” of our youth or the waists to wear skinny jeans. For so many of us, it’s a process- coming to terms with our aging bodies and realigning our perspective of what’s important- and what should be valued- as we enter our later years. And so many of the personal stories that women relate of coming to terms with their now older bodies discuss what they witnessed when their own mothers were aging (for one great example, read Tanya Shaffer’s blogpost, The Silver Revolution). But as Shaffer herself wrote, “A culture that is fixated on maintaining the appearance of youth is a culture of delusion. We are all aging…Why deny it?”

Perhaps one reason that so many of us have trouble coming to terms with our bodies as we age is that there is little representation in the media of real older women with real bodies. We may simply have seen too few real bodies of real older women to recognize that the way we now look is quite normal. This surfaced recently with the premiere at Sundance of the new movie Good Luck To You, Leo Grande, in which the fabulous Emma Thompson plays a widow in search of lust and romance, having spent decades in a passionless marriage. She hires a young man to fulfill her needs and as such, we see a very real 60+ woman fully nude on the screen. In a recent article in the Huffington Post (and in a recorded interview with Variety), Thompson discusses the challenges she faced doing such a nude scene with a body she describes as “untreated,” (meaning no surgical/cosmetic alterations). Commenting that it’s only now, given her perspective and maturity that she could do such a nude scene, Thompson’s remarks reflect an elegant acceptance of her naturally aging body that many of us struggle with.

A recent article in The Guardian discussed a new study out of New Zealand that found both men and women become more satisfied with their bodies over time (despite our youth-obsessed culture). However,  the reality is that many older women feel judged (and are judged) for their aging bodies. Life coach Susan Hyatt recently recounted an anecdote where she proudly wore a bikini to celebrate a milestone birthday and remarked that she was feeling the best she ever had, only to be taken down several notches by a hurtful remark on the cellulite on her legs (about which none of us have control). In this day and age, it takes a lot of courage to go public not only with acceptance but with celebration of the bodies we now inhabit as older individuals. In fact, many find cause for celebration in the liberation they experience once they no longer care what others think about the way they look. For example, in a recent article in Prevention, several post-menopausal women commented on how they have come to terms with their post-menopausal bodies. They all agreed that it’s time to bring a more realistic narrative to the public’s attention of what aging bodies are like so that more of us can feel confident with the bodies we now have. Their “celebratory” comments ranged from “I no longer weigh myself 3 times a day,” to “I prefer to be happy and accepting of my body.”

Psychologist Susan Sands just published a piece that provides 5 ways to make friends with your aging body. Her take? It’s ageism rather than aging that’s the real problem here.  The key to aging more comfortably in your own skin is to try and accept that it’s what’s “inside” the body (the way we sense and feel) that’s more important than any outward appearance. Moreover, she suggests you view aging as a culmination or fulfillment rather than a decline or deterioration, and perhaps most importantly, distinguish between that which you can control and that which you cannot. Recognize that everything is always changing. Impermanence is the reality in which we all live- in life and in our bodies. And as Tanya Shaffer quotes in her piece, “When you argue with reality you lose- but only 100% of the time (quote from Byron Katie).