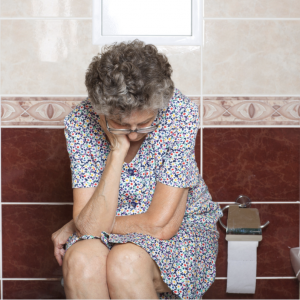 One advantage to being largely housebound all these many months? You’ve never been far from a bathroom. That may sound funny but for many people, straying far from the toilet causes anxiety and potential embarrassment. We’ve addressed urinary incontinence several times in previous agebuzz posts, and it’s a problem that afflicts both men and women, though it’s twice as prevalent in older women as it is in older men. In fact, the data suggest that one in two women over age 50 suffer some type of bladder leakage, whether it be stress urinary incontinence (caused by some physical exertion), urgency urinary incontinence (leakage during or following an urge to urinate), or some combination of both.

Causes for an overactive bladder, urinary leakage, and urinary incontinence can be wide-ranging, some within your control to mitigate, some beyond your control and potentially in need of medical or even surgical intervention. While it’s not a normal part of aging (which means you shouldn’t just suffer and accept your fate), among the causes are such age-related conditions as enlarged prostate, frequent urinary tract infections, kidney stones, and low estrogen levels. Other modifiable risk factors include obesity, caffeine, alcohol, overhydration, and certain medications such as diuretics. There are also neurologic causes that may include stroke, prostate surgery, diabetes, and Parkinson’s.

No matter the cause, the symptoms can be distressing if not outright damaging. In fact, according to a recent report by NBC News, the pandemic has shined a light on the predicament so many have when it comes to urinary incontinence. According to this report, ½ of the adults over age 65 who live at home rather than a facility struggle with bladder or bowel leakage, and the costs of products to help address the problem (such as adult diapers or absorbent pads) have been out of reach to many who have experienced economic hardship during the pandemic. Without such products, older adults can become isolated, experience rashes, or even acquire frequent urinary tract infections. There’s a stigma attached to the condition and a stigma attached to requesting help. For more on this condition and sources of support and help, take a look at the website of the Simon Foundation For Continence. And for a list of some of the better incontinence pads and products on the market, click here.

Depending on the reasons for your urinary incontinence, you could be greatly helped by exercises intended to build up and strengthen your pelvic floor muscles. While it’s important to have a discussion with your physician, it has been validated that pelvic floor muscle training can improve or even resolve urinary incontinence. In fact, it seems to have become downright trendy to engage in pelvic floor exercises (known as Kegels, after the gynecologist who developed these exercises) in order to support internal organs and prevent incontinence. For some descriptions and visual examples of just how to shore up your pelvic floor, click here and here. And there’s even an app now developed out of the UK to help you strategize and successfully implement your pelvic floor exercises. It’s called “Squeezy.” To find out more, contract and then relax, and click here.