No Bones About It: Men Lag Behind When It Comes To Diagnosing and Treating Osteoporosis 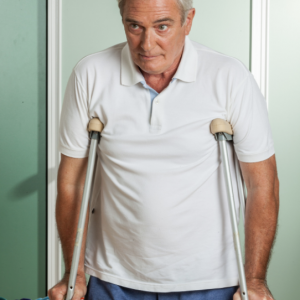 No Bones About It: Men Lag Behind When It Comes To Diagnosing and Treating Osteoporosis

Conventional wisdom suggests that osteoporosis (the bone disease involving loss of bone mass or creation of too little bone) is a disease most prevalent in older women. While both older men and even younger men and women can be diagnosed with it, the reality is that most in the medical community (and even in agebuzz coverage of the disease) assume that the majority of patients with osteoporosis are older women who have gone through the rapid hormonal changes and bone loss that can accompany menopause. So you might be surprised to learn that 1 in 4 men over age 50 will break a bone due to osteoporosis and over 2 million American men currently have been diagnosed, with another 12 million considered to be at risk. In fact, older men are more likely to have osteoporosis than to be diagnosed with prostate cancer. For some comprehensive resources about the occurrence of osteoporosis in older men, pour yourself a glass of milk and read more here and here.

It should come as no surprise, then, that new research underscores the lack of diagnosis for, and treatment of, osteoporosis, even in men who have sustained fractures. In a new study presented at the recent American College of Rheumatology annual meeting, researchers examined the records of over 9800 male Medicare beneficiaries who had sustained an osteo- fracture to determine how frequently such men had been properly diagnosed and treated, not just for the fracture but for their underlying osteoporosis. It turns out that even though 20-25% of osteo-related fractures occur in older men, in only 3% of the cases reviewed were the men properly diagnosed and treated. Moreover, in 7% of these cases the men went on to suffer at least one more fracture in the following year. Given that osteoporosis is a “stealth” disease often not detected until real damage is done, it would appear that older men, especially those experiencing such symptoms as posture or height change, as well as fracture or back pain, should be routinely screened and tested (with a bone density test) for osteoporosis. In fact, the conclusion of this study was that “the earlier identification of high-risk men who might benefit from targeted osteo screening and therapies would be of great value.”

Lest you think this is an easily adapted recommendation, however, you need to know more about Medicare payment for osteoporosis screening in men. It turns out that despite the risk of decreased mobility, loss of independence, or potential chronic pain that might accompany an osteo diagnosis (not to mention the additional costs to Medicare of then treating these symptoms) Medicare guidelines skew in favor of screening older women rather than older men. So, for men to receive a Medicare-covered bone density test, their physicians may need to go the extra mile to certify that such men should get tested. While that’s not impossible, it does mean that older men do not receive the routine screening that older women often receive. Given that older men can be at risk due to medications, low sex hormones, smoking, or lifestyle behaviors (such as alcohol consumption, inactivity, or poor diet), it would seem that routine osteoporosis screening in older men, before an injury takes hold, would be a wise investment for both individuals and society at large- no bones about it.