Legend In His Own Time: Tony Bennett Breaks A Record - agebuzz

Legend In His Own Time: Tony Bennett Breaks A Record 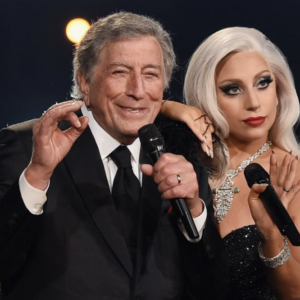 Legend In His Own Time: Tony Bennett Breaks A Record

Most people never break a record of any sort in their lives to qualify for the Guinness World Records. But to have that accomplishment, and achieve it at the age of 95, certainly suggests an extraordinary person. In this case, the extraordinary person is none other than renowned musician Tony Bennett, who, at the age of 95, has just broken the Guinness World Record for being the oldest person to release a record album of new material. With his brand new album done in collaboration with his protege Lady Gaga, Bennett’s new work, entitled Love For Sale, is already atop both Billboard’s Traditional Jazz Albums and overall Jazz Albums charts (all dated Oct. 16).

What’s perhaps even more remarkable than this music achievement is the fact that Bennett was diagnosed with Alzheimer’s in 2016 and only recently went public with the diagnosis in an interview with his wife Susan in AARP Magazine. As described by Susan, at this point Bennet has few moments of clarity in his day-to-day life and cannot discuss his diagnosis, as he drifts in and out of awareness and spends most of his time in his Central Park apartment. Nonetheless, his “music memory” remains intact, and he and Gaga were able to write and record the music for this new album together over the time of 2018-2020. In celebration of the album’s release, Bennett and Gaga performed together in what were Bennett’s final public performances at Radio City Music Hall. For a “behind the scenes” look at Bennett, Gaga, and their preparation for these concerts, take out your tissue box and watch here.

Bennet will no longer give live performances, as his physician and family have decided that the travel and preparation involved are too much for him at this point. But his musical career may not yet be over. As experts know well, music memory may survive in the face of Alzheimer’s as the key brain areas connected to music memory are largely untouched by the disease. To track his continued success and connection to his fans, check out his Facebook page here. And to watch Bennett and Gaga perform the title song from their new album, get ready to swing and click here.