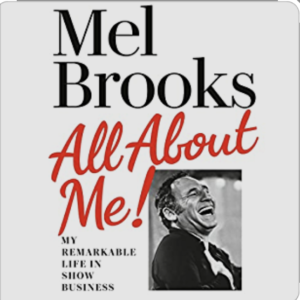 So how did you spend your time during lockdown? Did you watch old movies? Look for comedies to distract you from the worries of reality? Maybe you rewatched some old favorites, such as Young Frankenstein or Blazing Saddles? Or maybe you looked for some old television shows like Get Smart or even some oldies but goodies from Sid Caesar? If you indulged in any of these sources of pleasure, then you spent some pandemic time with none other than comedian Mel Brooks who, at age 95, has just published his memoirs, All About Me. Brooks spent his time during the pandemic writing this book, which tells his story from his Brooklyn origins (when he was known as Melvin Kaminsky) to his service in Europe during World War II, to his post-war adventures in the Catskill Borscht Belt, and then on to television, Hollywood, Broadway, and ultimate fame and fortune as a master writer, comedian, and director. In fact, did you know that he’s one of the few entertainers to be an EGOT winner (Emmy, Grammy, Oscar, and Tony awards)?

A few more details about Mel that you may not realize: Considered a purveyor of “hilarious tastelessness” he was fearless in his approach to comedy, spoofing such cultural icons as James Bond (with his pioneering television comedy Get Smart (co-written with the writer and actor Buck Henry), serving up his clownish portrayal of Hitler in both the film and Broadway productions of The Producers, and delivering to Americans a searing satire of racism in the film Blazing Saddles, co-written with none other than legendary Black comedian Richard Pryor. Did you know that he also had a film production company that produced such memorable films as The Elephant Man and Frances?

With the publication of his new book, Brooks has been out and about speaking to the press about his life, his loves, and his approach to comedy and writing. Married to actress Anne Bancroft for 40 years, you can read an excerpt from the book about how they met and married here. You can also watch an interview with Brooks conducted by George Stephanopoulos about his life and illustrious career here. Finally, Brooks was just interviewed in The New Yorker by writer Michael Schulman, which you can read here. Not content to rest on his laurels, Brooks is currently working on an 8 part series for Hulu entitled The History of the World Part II, which will be a sequel to his 1981 comedic film, The History of the World Part I. Not bad for a guy who turned 95 this year. As the saying goes, the show must go on!