Early Indication: Apathy May Signal The Onset Of Dementia 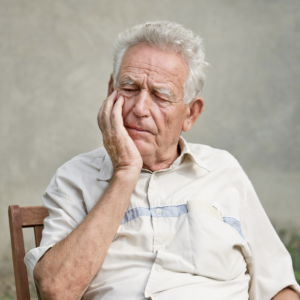 Early Indication: Apathy May Signal The Onset Of Dementia

While we know that healthy lifestyle behaviors can lessen the risk of being stricken with dementia and even slow the pace once symptoms of mild cognitive impairment appear, ultimately we still have little in our arsenal to stop brain deterioration from dementia once it’s taken hold. That makes it all the more important to understand early warning signs that may signal the beginning of dementia. And now, a newly published study in Neurology provides just such an early warning. Researchers from UCSF followed 2000 research participants in their 70s for up to 9 years, none of whom had clinical signs of dementia upon entering the study. The participants were sorted into groups having less or more apathy (having lost interest in things they used to enjoy or interest in social activities). At the study’s conclusion, those grouped into the severe apathy group were 80% more likely to have developed dementia than those in the low apathy group. Given this stark finding and the fact that apathy is a trait that should be noticeable to involved loved ones, researchers are hopeful that patients so identified could receive early aggressive interventions to limit or slow the development of dementia. To find out more, click here.

Dementia has also been in the news for other concerning reasons. Given that 5 million people currently have dementia in the United States (a statistic that is expected to triple by 2060), there is always concern for the health and well-being of this vulnerable patient population. And it seems that in this time of COVID, the unexplained and unexpected deaths of thousands of more dementia patients than usual is raising cause for alarm. Apparently, this past summer, deaths attributable to dementia were up 20% from the same time last year. This is highly unusual and could be attributable to many factors, including the social isolation caused by the pandemic, the decrease in access to medical care because of strains on our health systems, or even because of caregiver burnout during these difficult times. Whatever the reasons, it’s a surprising and distressing data point in the midst of all of the other challenges attributable to the coronavirus.

One final bright spot- Researchers from Cambridge University have determined that swimming in cold water may provide protection to the brain from such degenerative brain diseases as dementia. Apparently, there is a “cold shock” protein found in the bloodstream of swimmers who dive in during the winter and that protein has been found to have some protective qualities for the brain in certain situations. The research is not yet published and no one is urging you to join the Polar Bear Club just yet- But there may be a way to develop a drug to mimic this protective effect down the road. So pull out your Speedo and read more here.