An Aging Paradox: Time May Speed Up But Our Sense Of Getting Old May Be Slowing Down 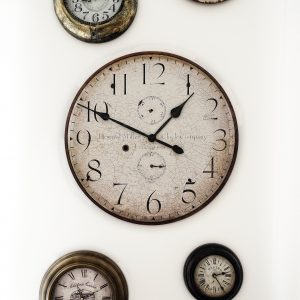 An Aging Paradox: Time May Speed Up But Our Sense Of Getting Old May Be Slowing Down

Raise your hand if you’ve said, “I can’t believe it’s already April next Monday.” We all know the feeling: time just flies as we get older, and we wonder how it’s possible that the days, months and years go so quickly. And now a professor at Duke University has provided a biological explanation for why we all seem to feel this.

Writing in the European Review, Dr. Adrian Bejan of Duke University describes biological changes in the way older brains process images to help explain why our perception of time speeds up as we get older. As our brains age, their ability to process and integrate mental images slows down. With fewer images signaling our brains, our sense of time apparently speeds up. It’s a complicated concept of brain circuitry but if you’re intrigued and interested in knowing more, calm your mind and click here.

The paradox is that even as time seems to go more quickly as we get older, many of us don’t feel particularly “old,” regardless of our age. An interesting new post in Next Avenue explores this phenomenon of the disconnect between our date of birth and our sense of ourselves as “old.” Because so many of us are healthier and more active at an age once considered “old,” we may need to rethink what constitutes “old age,” and what it means to be “an older person,” in the 21st century. This is especially so as each generation seems to be living about a decade longer than the previous generation. The irony is that as we get older, we are “younger” for longer. For more food for thought on this philosophical conundrum, take a look here.

Finally one word of caution. Not everyone ages in the same way, and there is increasing diversity in aging patterns among different populations. A recent study out of Yale, UCLA, the NIH, and Stanford found that older African-American women who were less educated actually had an accelerated aging process when compared to the general population. And another recent study of international populations found wide variations between the way people aged and what their health was at similar ages. So, for example, the most extreme finding was a 46-year-old person in Papua New Guinea looked biologically similar to a 76-year-old in Japan. The study findings are an important reminder that where you live and the circumstances of your life may be critical in determining how “old” you feel at any given age.