The Time Of Bill- Photographer Bill Cunningham Is Having His Moment 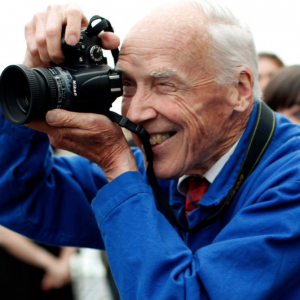 The Time Of Bill- Photographer Bill Cunningham Is Having His Moment

If you’re a reader of The New York Times, you no doubt remember photographer Bill Cunningham. Chronicler of all things fashion and style for the paper, Cunningham was a ubiquitous man around town with his blue coat and bicycle, captured so wonderfully in the 2010 documentary Bill Cunningham: New York. Having passed away in 2016 at the age of 87, he was a beloved figure working the streets of New York until close to his death. And now, he seems to be having his moment, with an upcoming museum exhibition, second documentary and even his “secret” memoir due out this fall. First, The New York Historical Society will premier its exhibit, Celebrating Bill Cunningham, from June 8th – September 8th. Along with some never before seen photos of his, you’ll be able to see his bike, beloved blue jacket, personal memorabilia and even hats of his own design. You can read more about this upcoming exhibit Here. Next, be on the lookout later this year for another documentary about Bill, entitled The Times of Bill. Finally, you’ll be able to read in depth about his life in and out of fashion in his memoir (discovered after his death), Fashion Climbing: A Memoir with Photographs, due out in September. If you’re a lover of all things Bill Cunningham, the upcoming months will truly be a treasure trove.