Split Ends: Divorce Among Older Adults Is The Highest Of Any Age Group 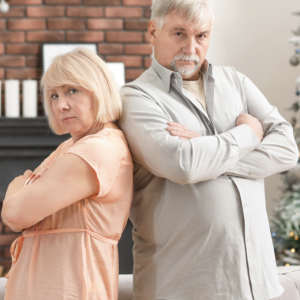 Split Ends: Divorce Among Older Adults Is The Highest Of Any Age Group

Let’s face it: The Pandemic has not only taken a physical toll but for many, there’s been an emotional hit that’s hard to ignore. And when it comes to relationships, even the strongest of bonds have been sorely tested with the financial burdens of the pandemic, coupled with the upheaval of work and home life, and the unfamiliar reality of spending long days with family members. Early in the pandemic, we addressed what could be done to ease some of these stressors but for many, the reality of “the new normal” has created the impetus to rethink what- and who- is important in life. As one expert exclaimed, “Loss of income, employment, and separate routines that allowed healthy time away from each other have produced a perfect storm.”

Even before the pandemic, rates of what’s known as “gray divorce”- i.e, divorce among people over age 50- were rising. Now, in the wake of changed circumstances for everyone, divorce lawyers fully anticipate that these numbers will increase even further. In fact, current data shows that one in four people getting divorced is now over 50, and over half of the “gray divorces” now occurring are in couples married over 20 years. Many of these “silver splitters” are now divorcing for the second or even third time, which means they know they can get through a divorce and understand what life on the other side is like. There’s also less stigma because they’ve already gone through the process. More generally, in today’s world, there’s much less stigma than there used to be- especially for older women- when you become divorced.

However, older women are still more likely to suffer financially from a divorce than older men. Women tend to experience a drop in income, lifestyle, and retirement savings, something that may be difficult to make up if you enter a divorce in your later years. In fact, according to the Social Security Administration, 20% of divorced women aged 65 and above live in poverty and are less financially secure than married women or widows their age. Divorce experts warn that before going through a divorce after age 50, there are many things you should consider in order to avoid “costly” mistakes: For example, are you truly aware of your marital finances? Do you have your financial advisors lined up to help you through what is likely to be a life-changing process? Are your support systems ready to embrace you?  As writer Paul Brandus makes clear, “Divorce can be really expensive. Old age can be really expensive. But what’s really expensive? Being older and divorced. If you’re in an unhappy situation and think divorce is the answer, well, tread carefully and make sure that your needs are taken care of.” Perhaps most importantly, if you’ve decided a divorce is necessary for you to truly live the next “chapter” of your life, then don’t let your emotions get in the way of what can, in reality, be a business transaction.

And speaking of business transactions, you’ve undoubtedly heard by now of the pending divorce between Microsoft billionaire Bill Gates, age 65 and his wife of 27 years, Melinda French Gates, age 56. Squarely in the middle of what’s now a “gray divorce,” their split is a striking reminder that money isn’t the only problem in a marriage. As writer Lisa Bonos expressed in a recent Washington Post article, “It’s comforting to know relationships are difficult no matter who we are.” The bottom line seems to be that as you reach your later years, and realize that along with living longer, you may still have several decades to go in your current marriage, some of us make the calculus that we want to explore a new life, even if we do so without a long-time partner. It seems many of us do not want to get to the end of our lives filled with regrets. As divorce lawyer Nicole Sodoma states, “The people we marry are not the people we divorce because people change.” If those changes have led each member of the couple to head in a different direction, even the wealthiest among us may feel the need to start anew.