SnapShot: Photos That Capture The Era Of Miami Retirees 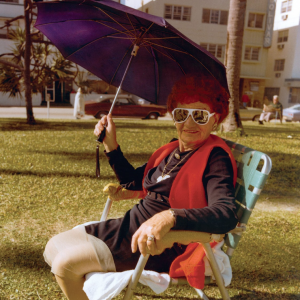 SnapShot: Photos That Capture The Era Of Miami Retirees

While South Beach Miami is currently known for its hip art culture and beautiful people, back in the day it was home to the largest concentration of Jewish retirees in the country. In that time, it had its own culture and glamour that was unrivaled and certainly idiosyncratic. And no one captured that era better than photographer Andy Sweet, a Miami native himself, who worked to document the end of the era of Jewish retirees in South Beach, as cocaine trafficking and violence began to take hold and force out the older population. Tragically, Sweet himself was murdered in Miami at the age of 29.

Fortunately for those of us whose parents or grandparents lived that life, we have a new book out of Sweet’s photography to remind us of the good old days. Shetl In The Sun is the name of the newly published work of Sweet’s photographs that capture that era in all its living technicolor. You can read a nostalgic review of the era, and a description of the book, in this week’s New Yorker.

And to further enhance your recollection, or if you just find yourself interested in this intriguing story, there’s a new documentary utilizing Andy Sweet’s photos, among others, called The Last Resort, now on Netflix. So grab your terry cloth robe, and watch the trailer here.