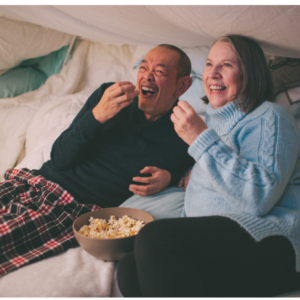 One way to stay cool and happy during this hot weather is to be indoors (and hopefully in air conditioning) and watch movies. In fact, in England, there’s a movie chain offering free admission during the heatwave to redheaded patrons (who are said to be at more risk from the heat due to their hair coloring and complexion!) So, for your viewing pleasure, we thought we’d introduce you to several new documentaries covering a wide range of topics and hopefully providing you with hours of cool and compelling entertainment this summer.

First up is a new documentary exploring the challenges and complexities of chronic insomnia. Called The Quest For Sleep (and available to stream here for free) the film follows the lives of several people who suffer from chronic insomnia, not only dealing with dreaded evenings trying to sleep but the challenges of living daily life when you are chronically sleep-deprived. Given that insomnia becomes more of a problem for people over 60, it’s likely that many of us can relate to the anxiety and anguish that these real people experience in their lives. To find out more about this film, running a little longer than one hour, pull out your pillow and click here.

Next, consider the new documentary covering the “encore careers” of 80-something comedians Natalie Levan and George Saltz called “Still Standing.” Conceived by director Elizabeth Zephryine McDonough, this film is currently streaming without charge on The New Yorker website. Both Levant and Saltz came to their professional comedy careers late in life, after the deaths of their spouses, and both appear to be having the time of their lives in their newly chosen pursuit. Their humor ranges from borscht belt to raunchy, all infused with self-deprecating humor about the indignities of growing old. Find out more by looking at the Instagram page for the film here and reading more on the director’s home page here.

A long, long time ago, there was a song called American Pie by singer Don McLean. You may remember the song, which came out in 1971, following the complexities and chaos of the late 60s. It ran for 8 ½ minutes (longer than virtually any other single in history) and its storyline was never quite clear. It references “the day the music died” (commenting on the death of singer Buddy Holly in a plane crash in the 50s) along with other somewhat mysterious political and cultural references. Now, a new documentary has been released (streaming on Paramount Plus) to explain the phenomenon that this song became and to explore line by line the meaning of the song. Hear directly from singer Don McLean as he describes his process for writing the song, what influenced him, and what happened when he sent it out into the world. Read more about the song and the film’s development here and click here to read the New York Times review of the film, which runs for 1 ½ hours.

Finally, they were actors known for their integrity and brilliance. They were a couple known for their devotion and commitment to each other. And yet despite living their lives in public, there is so much we don’t know about Paul Newman and Joanne Woodward, both as individuals and as a married couple. For those who loved their films and admired the people they were, you’re in for a treat with a new 6-part documentary on HBO Max which starts streaming today (July 21st). Called The Last Movie Stars, the film is directed by actor and director Ethan Hawke and executive produced by director Martin Scorcese. Based upon 100 interviews conducted in preparation for a memoir by Paul Newman (tapes of which were destroyed but transcripts survived), the film uses the real words of people who knew and worked with the couple in real life. Actors George Clooney and Laura Linney voice the words of Newman and Woodward in the film. You can watch the movie trailer here. And then watch here as Ethan Hawke was recently interviewed about this new film by CBS news.