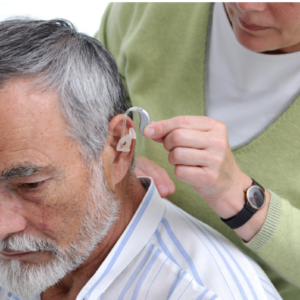 You may find people chuckling at you when you ask for the tv to be turned louder, or you ask, for the 80th time, “Can you repeat that?” But hearing loss is no joking matter and it’s largely an untreated condition in the United States. After heart disease and arthritis, untreated hearing loss is considered the 3rd most common physical condition experienced by US adults. In fact, it’s estimated that ⅔ of Americans over age 70 have difficulty hearing, whether due to aging, noise exposure, disease, medications or hereditary conditions. Furthermore, there’s now solid research that being hearing impaired is associated with less physical activity and more sedentary time (as opposed to those without hearing loss), factors which inevitably work against healthy aging. Hearing loss is also associated with cognitive and memory problems. So, losing your hearing is not just an inconvenience: it may have real consequences for your health and well-being as you age.

For the past 50 years, only a few companies controlled the market for hearing aids, which have been regulated as a prescription medical device, making access challenging, given the need for a professional to test your hearing, prescribe a device, and fit the device. The expense (sometimes up to $8,000/pair) and access issues meant that most people could not avail themselves of this help, even if they wanted to (though stigma is also a reason that many decide not to seek them out). Furthermore, Medicare to date has not covered the expense of prescription hearing aids (though some Medicare Advantage plans do pay for them). However, in 2017 Congress passed a law allowing for over-the-counter sales of hearing aids, thereby eliminating some of the barriers to access, and hopefully spurring on competition for manufacturing and selling (and thus lowering the price and improving the quality). Just last week the FDA finally released a rule for this new law, allowing for the sale, direct to consumers, of over-the-counter hearing aids, that will be available without prescription or medical exam and are intended for those with mild-to-moderate hearing loss. There will be a 90-day comment period before the FDA rule is finalized and then it’s expected that companies will begin selling these non-prescription hearing aids sometime in the summer of 2022. It’s anticipated that the eventual price will drop below $1000, and perhaps be just a few hundred dollars.

During the time it took for this new rule to be created, the hearing assistance “industry” developed innumerable devices that while technically not “hearing aids” could nonetheless enhance the hearing of the wearer and even lessen the stigma of a hearing device, given that many of these innovations were combined with popular earbuds or other “hearable” devices. In fact, over the past several years there’s been a real convergence between consumer electronic products and hearing devices so that many of the industry leaders in electronics (like Apple, for example) have begun to include hearing enhancement as part of their consumer products. It’s expected that this new FDA rule will cause an explosion of new products marrying consumer electronics, wellness, and hearing health.

For those with severe or profound hearing loss, it will still be optimal to seek out the expertise of an audiologist or hearing specialist, and perhaps spend the money necessary to get the features of a hearing aid unavailable from over-the-counter models. But for those whose hearing loss is not so severe, bypassing the medical system and going straight to your local electronics store will open up new hearing possibilities. As one expert stated, “There is no evidence that consumers will be harmed by buying a hearing aid without seeing an audiologist, and the benefit of getting some improvement in their hearing will outweigh any risk.” So keep an ear out for the final pronouncement of this new FDA rule in the coming months: your ears (and your family) will thank you for it.