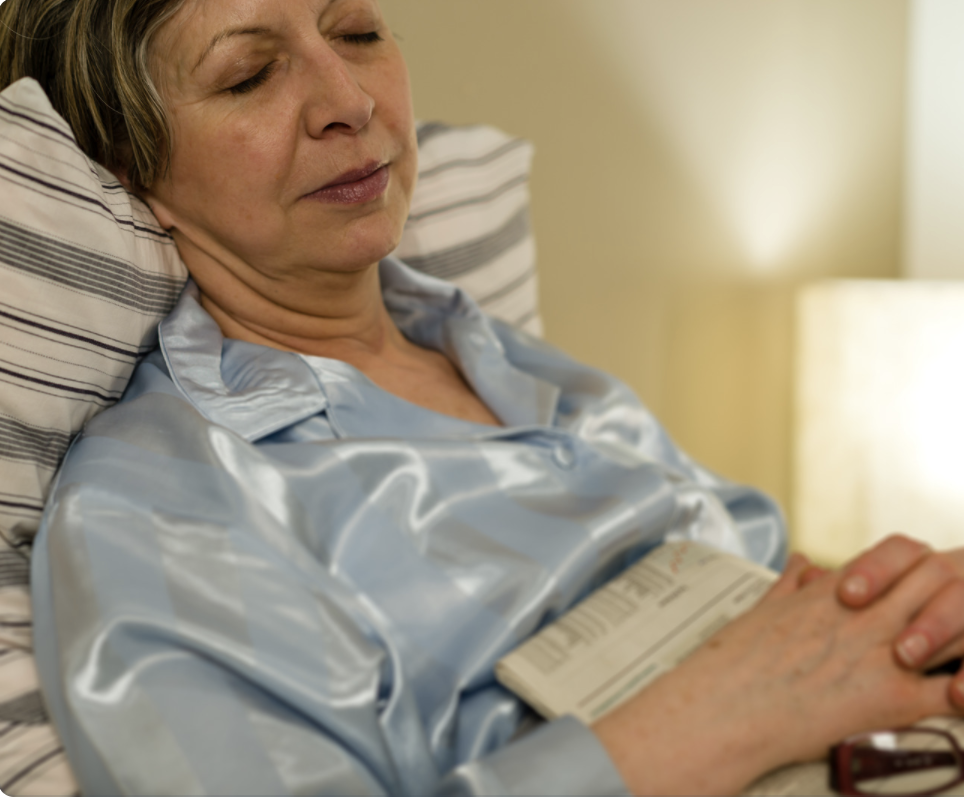 Using CBD To Help With Insomnia By Bonnie Hagen

Everyone assumes that sleep problems are just part of getting older, right?  The truth is, according to The National Institute on Aging,  seniors need at least 7 to 9 hours of sleep per night to stay healthy, just like younger adults. In fact, seniors who sleep better report fewer chronic health problems, improved mental health, stronger memory, more energy, better balance, and many more benefits. According to the Centers for Disease Control and Prevention (CDC), seniors who regularly sleep less than seven hours per night increase their risk of heart attack, diabetes, stroke, asthma, COPD, kidney disease, cancer, arthritis, and depression. That list alone is enough to keep you up at night.

Sleep problems are commonly called insomnia, the habitual inability to sleep. Insomnia can be short-term (acute) or long-term (chronic). It may even come and go. Acute insomnia occurs from one night to a few weeks. Chronic insomnia happens at least 3 nights a week for 3 months or more. The primary causes of insomnia include:

The first step to treating insomnia is to see a somnologist, a sleep doctor. A somnologist will do a physical exam and ask for your medical and sleep history. He or she may ask you to keep a sleep diary for a week or two. You might also have special tests at a sleep center. Almost all doctors will suggest improvements to your “sleep hygiene,” i.e., good habits that promote sound sleep.

Some sleep hygiene improvements are particularly important for seniors, according to the Sleep Foundation. These include 1) keeping your bedroom quiet, dark, and at a temperature below 75 degrees Fahrenheit; 2) avoiding daytime naps which can disrupt healthy sleep rhythm; 3) following a firm schedule of going to bed and getting up each day; 4) and raising sleep efficiency, the proportion of time sleeping to time spent in bed, to at least 90% (revealed by the sleep diary referred to above). A corollary to the last point is don’t toss and turn if you can’t sleep. If you haven’t gotten to sleep in 20 minutes, get up and stretch or read in low light, preferably something not too stimulating.

As important as sleep hygiene is, sometimes medication might be a good idea. But medication should be carefully prescribed, used sparingly, and for short periods of time. Seniors, in particular, should avoid hypnotic sedatives that increase the risk of falls. Also, seniors are at greater risk of drug dependency. According to the Mayo Clinic, Doxepin (trade name Silenor) and Ramelteon (trade name Rozerem) present the least risk of dependency to seniors, but they do not come without risk of side effects. Melatonin, an over-the-counter sleep hormone, is considered safe and some people find that it improves their sleep.

Cannabidiol, also known as CBD, has been shown to help with insomnia. For those who are unfamiliar with CBD, CBD comes from the cannabis plant and does NOT cause any impairment effect like THC – the other famous compound from the cannabis plant that gets people high. CBD and THC are the most well-known and most researched compounds in the cannabis plant; however, there is still plenty of research that needs to be done. Preliminary research has shown that CBD is gaining traction for certain conditions such as pain, anxiety, inflammation, and, yes, insomnia.

In the 1990s researchers discovered that humans have an endocannabinoid system, just as we have a respiratory system, circulatory system, reproductive system, etc.  The endocannabinoid system plays a role in maintaining certain body functions, such as mood, appetite, sleep, and regulating circadian rhythms. Within the endocannabinoid system is a network of cannabinoid receptors in the brain and central nervous system. Cannabinoids attach to these receptors and have various effects. As far as how they may affect sleep, some research indicates that the CBD may interact with specific receptors, potentially affecting the sleep/wake cycle. Additionally, CBD may also decrease anxiety and pain, which can both interfere with restful sleep. By reducing certain symptoms, it’s also possible that sleep may improve.

This was the case with one of my customers who tried CBD for the first time.  John F. was in his early sixties. He was late in saving for his retirement and picked aggressive growth stocks to try to make up for lost time. He was experiencing extreme anxiety because the stock market had just crashed, and he lost a large percentage of his portfolio. He was concerned about building his portfolio again so that he would be able to retire without being financially dependent on his grown children. He tossed and turned every night and was never able to shut off the voice in his head that was preventing him from both getting to sleep and staying asleep. When he finally fell asleep, it was only because he had an alcoholic drink or two to help him along. Once the alcohol wore off, he woke up. He was never fully rested, often experiencing terrible brain fog and an inability to make sound decisions. His close friend noticed the change in him and encouraged him to speak with me.

When John and I met, he told me his story. He didn’t know how to get to sleep without alcohol. He didn’t crave the alcohol, he craved the sleep and wanted to stop drinking alcohol. I told him about CBD and the research that was available regarding the use of CBD for insomnia. He decided to try it. I told him that the effect is cumulative, and he shouldn’t expect to see any results immediately. It would take about two weeks for it to build up in his system and the effect would be subtle.  About two months later John called to tell me that he had stopped drinking alcohol to get to sleep and used the CBD instead. He experimented with the dosage and found that 25mg in a full-spectrum oral tincture in the morning and 25mg in a full spectrum oral tincture before bedtime works best for him. He was thrilled that he was now able to get to sleep and stay asleep. The anxiety was greatly reduced throughout the night and daytime too, although his portfolio was still in the toilet. But now, without the brain fog, he was able to think rationally and make better decisions regarding his portfolio. He was also thrilled to discover that CBD was not addictive when he traveled for a few days on business and accidentally left his CBD behind. There was no yearning or craving the CBD. He was still able to sleep because of the cumulative effect. When he got home, he returned to his regular schedule.

While there was an underlying cause of anxiety for John’s insomnia, Rita S., another customer of mine, came to me complaining of insomnia as a consequence of aging. She had gone through menopause, but during menopause, she had woken up frequently through the night as she experienced multiple temperature changes – sometimes being so hot and drenching the sheets with sweat and sometimes being so cold that she had to put on layers of clothing under her blankets. These episodes ultimately disappeared over time  Rita found that she was able to fall asleep quickly, but could not stay asleep throughout the night. She paid attention to her sleep hygiene, making sure to not have screen time an hour before bed, darkening the room, setting an appropriate temperature, using a noise-canceling machine, and not eating or drinking anything that would cause wakefulness. She was baffled when she did all the right things, yet still found herself awake hours before her alarm was set to go off.

Rita and I spoke about CBD and made a plan for her to try. Dosing is more of an art than a science and Rita knew that she would have to experiment to decide what was right for her. She started with taking 25mg of a full spectrum oral tincture about an hour before bed every night and using a topical CBD roll-on on her temples and nape of the neck that also has the essential oil of lavender in it. Lavender is well known for helping people to feel calm and relaxed. People have been using lavender for centuries to cure many ailments including insomnia.  The combination of CBD with lavender is a powerful combination that boosts a person’s neuroprotective properties.

A good night’s sleep is very important. No one knows that more than the sleep-deprived. So, taking the steps to improve sleep with lifestyle changes and the judicious use of sleep aids is a good health investment. Since we spend about a third of our life in bed – either sleeping or trying to sleep – it makes sense to work with your doctor to experiment with these tips to improve sleep. As the old Irish proverb advised, “A good laugh and a long sleep are the best cures in the doctor’s book.”

Bonnie Hagen is the principal and founder of Bright Formulations LLC, a health and wellness company that specializes in hemp extract with CBD.  The Bright Energy ® brand of hemp extract with CBD was launched with the intention of helping people achieve their health and well-being goals, using the all-natural hemp plant. Bonnie helps people use the hemp plant to free themselves from pain, insomnia, stress, and discomfort. Seeing repeatedly how this incredible plant provides protection, grounding, balance, regeneration, clarity, purpose, and peace to those who use it wisely, Bonnie decided to build a different kind of company around it. Using clean and sustainably grown ingredients in her formulations, Bonnie brings to the marketplace hemp extract with CBD that is grown without chemical pesticides, herbicides, or fertilizers, is extracted without using harmful solvents, and is bottled without any artificial ingredients or fillers.