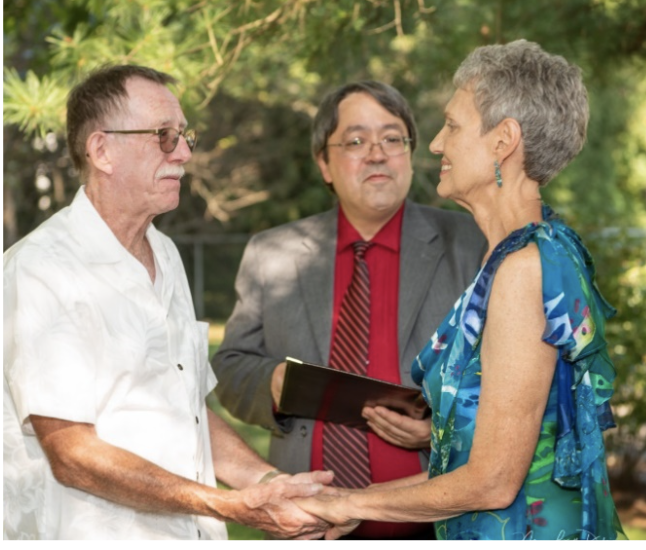 How I Learned to “Never Say Never” By Kathleen Rehl

Who signs up for online dating, not having dated for decades? And what woman in her 60s who doesn’t understand modern computer courting tries to meet a cyber match? That was me a dozen years ago.

As a mature widow, I wasn’t meeting eligible men through vintage methods. Blind dates arranged by friends were awkward. Most fellows wanted a younger escort. Trying to meet guys at art and music events resulted in strong new female friendships. Another widowed girlfriend suggested we bar hop at a karaoke club. I escaped that escapade, saying I didn’t sing well.

I labored long writing my online profile, including an ideal guy description. After dozens of edits and a glass of wine, I posted my piece and waited. Nobody even virtually winked at me. In hindsight, that first attempt was an academic resume, including my professional headshot. Yuck! Of course, nobody thought I was an interesting match!

After I rewrote my post several times and added a casual photo with my bicycle, fellows replied. Good. But I soon learned many of their profiles weren’t truthful. Not good. Several had money problems, asking me to pay for dates and loan them cash. Others lied about marital status, age, health, and addictions. Many wanted to get married and move into my house. I ended those relationships pronto, even calling the cops on a stalker.

Indeed, our later scholarly research published in The Journal of Financial Service Professionals, indicates that for most mature widows—dating, repartnering, and remarriage can be quite challenging.

My goal back then was companionship, plus a little romance. For sure not a ring.

I almost gave up.

Three years into unsuccessful computer dating, another renewal notice from that company was due. I tried convincing myself, “Just be content with family, girlfriends, successful business, and hobbies . . . without a man in your life.”

But soon before my subscription expired, one last possible match popped up online. What to do? Although I anticipated he probably wouldn’t be a good fit, I typed a quick reply and hit the send key. What the heck!

We progressed quickly from emails to phone calls and then an in-person meeting. A day later we bicycled together. That’s when I told Charlie I liked him, but if his goal was marriage, “I’m not the one for you.”

Surprised, Charlie said he was a snowbird who would return North in three months. He only wanted a brief friendship. As a widower, he explained that “never say never” was his motto for the future. YES! Perfect. I’d enjoy this man briefly and then he’d be gone. We planned our third date. By this time, I didn’t renew my online dating membership, either. I wasn’t interested in looking further.

During those next months, Charlie and I became quite fond of each other, enjoying many activities together. Preparing to leave, he invited me to visit his New York home later. I agreed.

We continued blending our lives and love as a committed couple over the next seven years. That’s when I told Charlie I craved a new chapter—marriage. He proposed. I accepted.

As a 71-year-old bride, I joyfully exchanged vows with Charlie two years ago. I continue to thank my new husband for being so right about “never say never.”

Kathleen M. Rehl, Ph.D., is a Certified Financial Planner™ and author of Moving Forward on Your Own: A Financial Guidebook for Widows. Happily “reFired,” she enjoys time with her new husband and their blended families . . . plus assists several nonprofits. Her work has been featured in the New York Times, Wall Street Journal, Kiplinger’s, CNBC, USA Today, and many other publications. Check out her website at http://kathleenrehl.com.