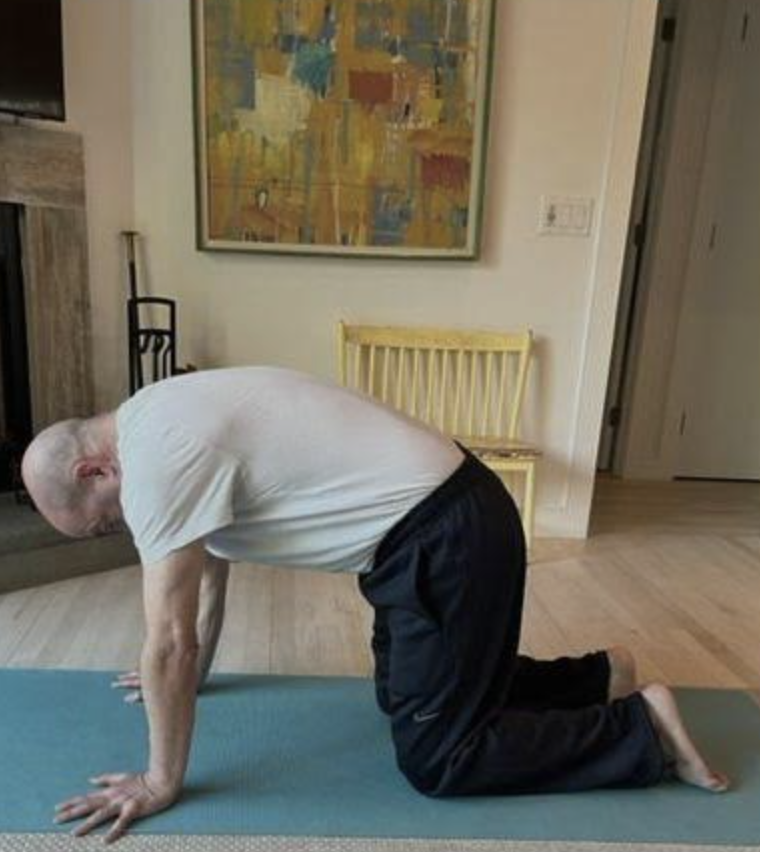 Exploring the Five Vows: A Path Toward More Enlightened Aging By Louise Applebome

I temporarily closed my yoga studio and canceled my Zoom yoga classes earlier this month to take part in a five-day online yoga immersion.

But it’s probably not what you think.

In fact, there was very limited physical yoga practice (asanas) during this course. The curriculum instead included more lectures, discussion, reading, and writing assignments, with the focus on self-exploration and self-discovery along the “yoga path.”

Not just on the yoga mat, but along the “yoga path,” that being more a way of life beyond just a physical yoga practice. The course was taught by a husband and wife team, Tias and Surya Little, who have a yoga studio in Santa Fe.

We studied the five niyamas which they referred to as The Five Vows.

Niyama is a Sanskrit word translated as rule, guideline, or restraint.

Niyamas are inwardly-focused and are concerned with the attitudes we adopt toward ourselves.

Adherence and attention to the niyamas help in the quest for healthy and harmonious bodies, minds, hearts, and souls, and in deepening our connection to our authentic and best self.

They’re about finding joy and losing obstacles to contentment. And, although inwardly focused, if practiced by the multitudes, it’s presumed that the world would be a better place.

The niyamas were first outlined in the Yoga Sutras, by Patanjali. Written more than 2,000 years ago, the sutras (threads or aphorisms) provide instruction on the theory and the practice of yoga.

An individual’s background, upbringing, heritage, religion, beliefs, and life experience are necessarily brought into the niyama framework. Continued observance and practice of the niyamas can help to increase healthfulness and lessen or eliminate depression, lethargy, complacency, and stagnation.

How niyamas manifest for each of us is different, of course, because each human being is unique.

Plus, each of us will go through many phases of experiencing and living the niyamas as we pass through different life chapters.

The niyamas don’t have a monopoly on this sort of quest toward greater ease and happiness in one’s life, but it is one more context and lens through which to find routes toward greater equanimity and less ego interference. It’s a means of acquiring greater trust and intimacy, and less isolation and psychic pain.

Admittedly, some of the teachings and concepts shared in the immersion this month were “otherworldly” and off in that fourth, infinite undefinable dimension, outside of the material realm.

I know…language and words don’t really do the niyamas justice. English words even lose something in their translation from the Sanskrit.

So, niyamas are very experiential and each person navigates them independently. There is no one size fits all.

For me, the course was yoga, pilgrimage, psychotherapy, Star Trek adventure, professional development, and graduate studies all joined into one.

It was in-depth, although we barely scratched the surface.

And, breaking out of our usual routines can be quite liberating and beneficial. So, for me, the change in schedule and habits for the five days honored the teachings of The Five Vows.

Although I’m not a young woman, I’m glad I may have a few years left to aspire, absorb and observe the niyamas. This is one of those lifelong investigations that seem to only open up more possibilities and to raise ever more unanswerable questions.

Intellect, brain, body, emotions, thoughts, feelings, memories, dreams all got to go on quite a wild roller coaster ride during those five days.

I’m so glad I jumped on board!

A few links for further information:

Louise Applebome, 68, is a Certified Yoga Instructor in Dallas. After “retiring” from a vibrant and varied professional career, she became a yoga teacher. She teaches all her classes on Zoom right now and accepts students, young or older, from wherever they are, both geographically and in their pursuit of a yoga practice. Louise will help you stay fit and flexible, and release tension, aches & pains from the body…and the mind. Her yoga studio in Dallas is del norte yoga and you can reach out to her at [email protected].