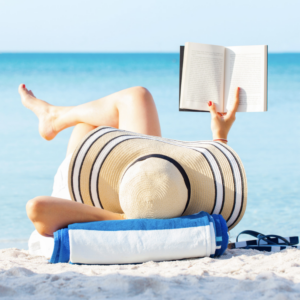 As sure as Memorial Day signals the unofficial beginning of summer, so too does this holiday weekend signal the search for the best “beach reads” for this coming summer season. What exactly qualifies as a “beach read”? New York Times best-selling author Jennifer Weiner recently suggested that for a book to be considered a beach read, “There’s usually a lightness to the tone, a quality of escapism, fantasy or whimsy to the plot,”- but then she ultimately concludes that a beach read really has come to mean “A book that I enjoy.” She then goes on to provide her own list of this summer’s best beach reads, which should include her own new book, part of a “beach read trilogy,” entitled, The Summer Place: A Novel.

But she’s not the only author putting forth her own recommendations for this summer’s reading list. Highly acclaimed author Ann Patchett,  owner of the Nashville bookstore Parnassus Books, has put out her own summer reading list, curated by herself and her bookstore staff. Among the titles that she recommends for this summer? Books of fiction, romance, mystery, and non-fiction, including titles by such authors as Carl Hiassen and Elizabeth Gilbert. You may also want to add to that list Patchett’s own recent book of essays, These Precious Days. And if you’re still in the market for further recommendations, The Atlantic has published a Summer Reading Guide which includes old and new works from writers such as David Sedaris, James McBride, and other works of history, contemporary fiction, and newly translated foreign titles.

Time Magazine also just put out a list of 27 new books that you need to read this summer. Among the celebrated authors you’ll find on that list are Tom Perrotta, Geraldine Brooks, and Hilary Mantel. And if you truly want to pursue the whimsy and fantasy referenced by Jennifer Weiner this summer, you may want to check out the new list of sizzling summer romance novels put out by Entertainment Weekly.

Finally, one other new title caught our attention, due as much to the author as to the story. Just published by Penguin Books, That Green Eyed Girl is the debut novel by author Julie Owen Moylan, a 61-year-old writer who came to book publishing later in her life and endured the rejection of 70 publishers for this book before it was finally accepted by Penguin. In an interview with That’s Not My Age’s Alyson Walsh, Owen Moylan discusses her journey to being a published author and her perseverance despite her age and background. The novel itself has received terrific reviews, as it evokes a New York City of the 50s and later the 70s, intertwining the stories of women with secrets in their lives. Judging from the reviews, this book definitely meets the definition of a terrific beach read: it’s a book you will enjoy! And an author you should support. So download her new book, along with whatever other new titles entice you and offer escape this summer!