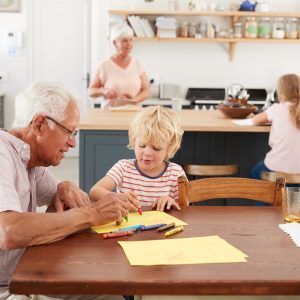 Well, it seems that in this day and age many of us have figured that out! In a new survey called the Meyers Baby Chaser Index (put out by Meyers Research, a data and analytics firm examining real estate trends), it’s clear that when it comes to Millenials and their children, Baby Boomer grandparents are following close behind and moving to wherever their kids and grandkids settle. In fact, fully ¼ of those surveyed stated that when in retirement, they will move closer to grandchildren, and many major real estate markets are seeing this trend in action, including in Charlotte, NC, Austin, TX and Nashville, TN. So next time you see a moving van, look out for both the rocking horses and rocking chairs- and read more about this trend here.

And if moving closer is not an option, but you’re looking for ways to strengthen those bonds, then consider “Grandparents University” for next summer’s plans. Originating out of the University of Wisconsin and now found on college campuses around the country, this program creates 2-3 day campus-based programs for kids (as young as 8 years old) and their grandparents to learn and play together in an intergenerational environment. So pull out your old college catalog and learn more about the program here.