An Aching Heart: Turns Out Men And Women Have Similar Heart Attack Symptoms 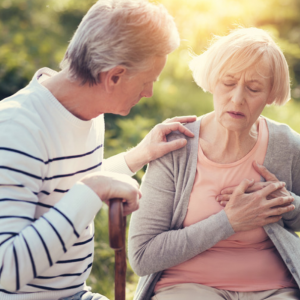 An Aching Heart: Turns Out Men And Women Have Similar Heart Attack Symptoms

You’ve probably seen the public service announcements: A man clutching his chest in anguish, a sure sign that he’s experiencing an acute heart attack. And it’s true that, for men, the most concrete sign of a heart attack in progress is the chest tightening and pressure known as “typical angina.” But for years, doctors have been warning that in women, a heart attack more likely presents with “atypical angina,” with symptoms including nausea, fatigue, sweating or back and arm pain. Given that heart disease is the main cause of death in both women and men, and that time is critical when heart attack symptoms arise, there is concern that thousands of women die needlessly because their symptoms are not quickly diagnosed as a heart attack.

While it is true that women may have these “atypical” symptoms, it turns out it’s also true that the majority of female heart attack victims have the same chest pain and tightening that men experience. That’s the conclusion of several recent studies, which suggests it’s time to retire the phrase “atypical” to ensure both men and women receive prompt and appropriate heart attack help. First, as reported in the Journal of the American Heart Association, researchers in Edinburgh found that doctors looking for less obvious, “atypical” symptoms may mean women are incorrectly diagnosed and less likely to get appropriate care. This came from an analysis of patients presenting with symptoms in the emergency department. So before you head to the ER, read more here. Similar findings were also reported out of Boston where researchers employed artificial intelligence to assess the “cardiolinguistics” or language that patients used to describe their heart attack symptoms. So while women may more frequently report additional symptoms beyond chest tightening, the majority do arrive at the ER with the same symptoms as men. The conclusion? Whether male or female, if you feel chest tightening or pressure and it’s escalating, don’t ignore the signs. And read more here.