The Artist Is 100: The Thriving Career of Carmen Herrera: 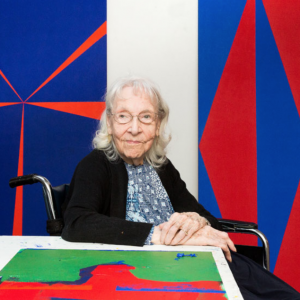 The Artist Is 100: The Thriving Career of Carmen Herrera:

When you hear that someone has been selected to be the inaugural artist at the new Lisson Gallery in New York City, or that her work will be the subject of a retrospective at the prestigious Whitney Museum in the Fall of 2016, you generally don’t think of a diminutive 100 year old woman. But Carmen Herrera, the 100 year old Cuban born, American based artist is having a spectacular moment in 2016.  Based in New York City since 1954, she continues to paint on a daily basis and her work continues to stand out for its bold simplicity, strong use of lines and vibrant colors. Adding to this acclaim, Herrera is now the subject of an award winning documentary, “The 100 Years Show.” To see a trailer for the movie and find out where it’s screening, put down your paintbrush and Watch This.